Islamic Voice 0 February, 2017 12:00 am
Muslims Give Land for Hindu Fair
Hanukkah marks the Expansion of Religious Freedom across the Muslim world
Man breaks his roza to donate plasma for two COVID-19 patients, says service is true duty during Ramzan

The Anjuman offered free coffee, water and biscuits at their stall at Gaighat near Gurudwara. The volunteers worked day and night to serve the Sikh devotees. 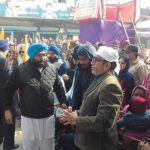 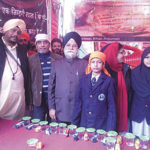 Patna: Bihar Anjuman, a voluntary organization of Bihar, welcomed Sikh devotees during the 350th Prakash Utsav of Guru Gobind Singh in Patna for three days from January 2 to January 4.
The Anjuman offered free coffee, water and biscuits at their stall at Gaighat near Gurudwara. The volunteers worked day and night to serve devotees. Welcoming them, the coordinator, Mohammad Naushad Ansari, said that Islam and Prophet Muhammad (Pbuh) have taught Muslims to be kind to the guests and extend their hospitality at the cost of their comfort. “The purpose of organizing this stall is to promote communal harmony besides services to the needy. After all, this is 350th Prakash Utsava and we may never see such huge number of devotees in our lifetime,” he added.
Millions of Sikh pilgrims from the world, including India, visited Patna, the birthplace of Guru Gobind Singh, the tenth Guru of the Sikhs. Members of Rashtriya Sikh Sangat, while talking to Irshad Alam, a senior member of Bihar Anjuman and Director of Saleheen Academy, said that Sikhism and Islam are monotheistic religions and some of the teachings enshrined in Sikh scriptures are very close to Islamic teachings.
Anwarul Hoda, Vice-President of Peace Foundation, while extending his overwhelming welcome to the devotees, said that the interaction of different communities’ and unity is a must for development of this country. “Brotherhood and harmony is the essence of all the religions”, he emphasized.
Many of the guests were taken by surprise watching Muslims from Patna hugging and welcoming Sikhs with the greeting ‘Aval Allah Noor, Upaya, Kudrat ke Sab Bande”. The posters at the stall contained sayings of Guru Nanak ji, along with teachings of service to mankind and brotherhood, which were highlighted in the banners.
Shakeel Ashrafi, an NRI and one of the founders of the Anjuman, felt that such occasions need to be utilized to promote brotherhood and amity in the society. Students of Saleheen Academy, dressed in their school attire, stood for hours with water bottles and biscuit packets in their hands. “The dedication and passion of the students to serve pilgrims is amazing”, said Tajinder Singh from Amritsar.
Speaking with Twocircles.net, Irshad Alam said, “The refreshment stall was set up near Gaighat check post for almost two days. The children of Saleheen Academy did a wonderful job and left a wonderful impression on the Sikh pilgrims. Some devotees also donated generously after seeing our efforts. We had initially planned the provisions for 5,000 people, but increased it to 10,000 later. This was an attempt to spread the message of communal harmony, and learn from each other.”
The volunteers were so careful about the nitty-gritty that they kept their head covered which is a norm in Sikhs. “We have learnt in these days the dos and don’ts of Sikhism,” a volunteer at the stall said.
TwoCircles.net