Islamic Voice 0 September, 2017 12:00 am
Muslim and Hindu Leaders Join Onam Celebrations
Abrahamia,’ a New Religion Experimented in the Mid-East
Vatican, Al-Azhar Team Up to Counter Violence in the Name of Religion 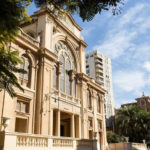 Cairo: The Egyptian Ministry of Antiquities “recently “ announced that it has begun renovations on the Eliyahu Hanavi Synagogue on Nabi Daniel Street in Alexandria at a cost of 100 million Egyptian pounds ($5.6 million). Eliyahu Hanavi is one of the oldest and most famous synagogues in Alexandria. Built in 1354, it was shelled during the French campaign in 1798, when Napoleon gave orders to raid it to build an artillery barricade between the Kom el-Deka fortress and the sea. The house of worship was rebuilt in 1850 upon the order of Muhammad Ali Pasha, who ruled Egypt from 1805 to 1848, and with contributions from his family.
Former Minister of Antiquities Zahi Hawass said that Eliyahu Hanavi is one of the biggest synagogues in the Middle East, and it is characterized by its unique architecture. The ceiling of the women’s prayer room collapsed in January 2016 due to bad weather. At that time, the Ministry of Antiquities formed a committee “ led by Mohamed Mahran, the head of the Central Administration for Antiquities under the ministry and responsible for preserving Jewish heritage “ to draft a plan to restore and protect the synagogue. Hawass asserted that this is not the first time the Ministry of Antiquities has renovated a synagogue at its own expense. The Moses Ben Maimon Synagogue was restored in 2010 with ministry funding. This synagogue was established at the end of the 19th century and is dedicated to the widely-known Jewish theologian commonly known as Maimonides, who was born in Cordoba, Spain, in 1135 and excelled in medicine, mathematics and philosophy. He escaped persecution and fled to Egypt, where he became the personal doctor of the ruler, Salah al-Din (or Saladin). He died in Egypt in 1204. Mohammad al-Kahlawi, the secretary-general of the General Union of Arab Archaeologists, says, “Jewish antiquities are an indispensable part of Egypt’s cultural heritage.”
(Extracted from http://al-monitor.com)