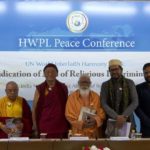 New Delhi: The society is facing moral crisis. As the religious practitioners who have common values and ideals of the religion such as truthfulness, mutual respect, we should join together and raise our voice to keep such values especially from the violation of human rights in relation to religion, said Ven.Lama Lobzang, president of International Buddhist Confederation while addressing a peace conference organized last month at India Habitat Centre in New Delhi.
Addressing the conference Syed Farid Ahmed Nizami, General Secretary of Sufi Cultural Organization, said, “Religious leaders have a duty to maintain high ethical and moral standards and strive to end any conflict in family or in society. The goal of religion should always be to achieve peace and justice”. The participants took part in an interactive interfaith dialogue seeking for the right role of religious leaders to ensure human rights and achieve peace responding to the recent issue that occurred in South Korea where a young woman died due to the coercive conversion program. The host organization, HWPL, has globally carried out various peace projects including inter religious dialogues, interactive sessions endorsing World Alliance of Religions’ Peace (WARP) programme. “ “
Religious leaders from Christianity, Islam, Hinduism, Sikhism, Buddhism, Baha’ism, and Jainism addressed the conference aimed to raise the awareness of human rights violations caused by religious intolerance. “ “
The conference was a part of UN World Interfaith Harmony Week.
“(Extracted from “http://muslimmirror.com)