Islamic Voice 0 May, 2018 12:00 am
Global Faith Forum builds bridges of understanding and community among Muslims, Jews and Evangelicals
Message from the Pontifical Council for Interreligious Dialogue for Ramadan
The Abrahamic Reunion 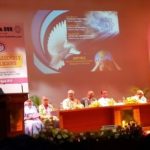 Bangalore: The 13th World Fellowship of World Religious Councils (WIFRC) concluded on April 21 with delegates from various religions celebrating the diversity of faiths and religious traditions. Around 200 people from all over India representing Bahai, Buddhist, Christian, Hindu, Jain, Muslim, Sikh, and Zoroastrian faiths conducted a series of symposiums and panel discussions on the theme “Accept, respect and celebrate diversity” during the three-day assembly at Dharmaram Vidya Kshetram in Bengaluru. The assembly ended with a resolution to start Harmony Clubs in various schools to give peace education to children and to promote celebration of diversities.
WFIRC president Swami Sadashivananda from Coimbatore, in his presidential address, said that the delegates believed in the element of innate goodness existing in all human beings. “It flourishes when people of all religions, castes and creeds come together to celebrate each other’s faith and festivals,” he added. WFIRC general secretary, Carmelite Father Roby Kannanchira welcomed the delegates saying the assembly’s focus was to take a personal and collective resolution to celebrate the faith of the other without losing one’s won, uphold one’s religion without hurting others and appreciate the differences without giving one’s uniqueness. Somen Baby, an industrialist in Bahrain, quoting the Holy Bible appealed to the delegates to become light to the world by works of love and thus the world will see the good works and glorify God.
A Harmony Walk organized on the first evening was inaugurated by the Maharaja of Mysore who walked all along as the delegates stopped at different places marked for each faith community. The assembly also paid homage to Carmelite Father Albert Nambiaparambil, founder of WFIRC who passed away last year.
(Extracted from mattersindia.com)