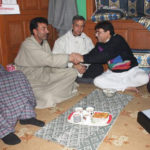 This Shivratri, Kashmiri Pandits and Muslims bonded and reached out to each other, with social media providing a rare platform to relive past memories. For perhaps the first time since hundreds of Pandit families migrated outside the Valley in the face of raging militancy in the 1990s, villagers, young and old, of Sumbal village in Bandipora, 30 km away from Srinagar, converged on the Nand Kishore temple, located under the shade of mighty Chinar trees early in the morning. They were carrying brooms and water containers in hand. “We have decided to clean up the premises of the temple for the Pandits. We want them to perform puja with all reverence and without any sense of insecurity,” said Rashid Dar, a local. Several locals were seen carrying placards. “Let’s celebrate next Herath (a term used by Kashmiri Pandits for Shivratri) together in the valley,” the placards read, an apparent reference to the return of Pandits to their native places.
Scores of Valley-based Muslim netizens greeted Pandits on the occasion as social media provided a rare platform to recall old memories. “I miss water-soaked walnuts that Pandits would offer to Muslims in neighbourhood. For ‘salam’, I would visit Pandits the next day after herath,” recalled Ashraf Kishoo on Facebook.
In another gesture, the government mailed through post offices specially-designed herath greeting cards.
“Around 1,000 greeting cards were delivered to Pandit families. The card highlights the poetry of Lal Ded, equally revered by Muslims and Pandits. It carries the picture of a stone temple of Mansbal that was restored with the help of locals. The idea is to highlight the rich culture the State has nurtured for centuries,” Works Minister and government spokesman Nayeem Akhtar said.
(Extracted from thehindu.com)