Islam and its Message to the Modern World

Recently, members of the New Delhi-based Centre for Peace and Spirituality (CPS) were invited to address students of the Catholic Vidyajyoti College of Theology, New Delhi, on ‘Islam and its Message to the Modern World’. The meeting was organized by Dr. Victor Edwin, a Catholic priest who teaches at Vidyajyoti. 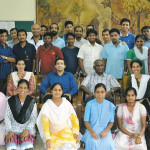