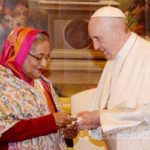 Pope Francis, the leader of the Roman Catholic Church, has praised Bangladesh for maintaining inter-religious harmony in a meeting with Bangladesh’s Prime Minister Sheikh Hasina in the Vatican City recently. In the meeting, the Pope also hailed Hasina for sheltering the Rohingya refugees who have fled persecution and violence in Myanmar. Besides the Pope, the Prime Minister met Vatican City Secretary of State, Cardinal Pietro Parolin. “It is assumed that the religious minorities are in bad condition in a Muslim-majority country. I don’t know what the Pope’s idea was about Bangladesh. Now he thinks highly of Bangladesh,” the secretary said.