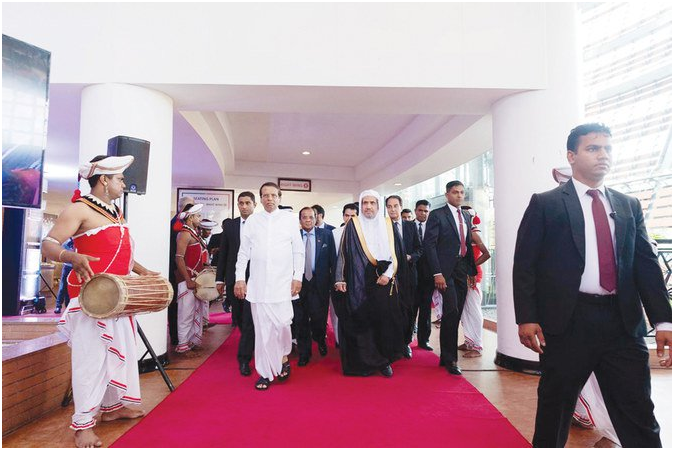 The Muslim World League (MWL) launched an interfaith summit in Colombo in the presence of Sri Lankan President Maithripala Sirisena. Participants included Islamic, Christian, Jewish, Buddhist and Hindu religious leaders, as well as more than 2,000 religious scholars, politicians, intellectuals and media professionals.
Mr. Sirisena delivered the opening speech. He thanked the MWL for holding the summit, and for donating $5 million to a support fund for families of victims of terrorist acts and injured people. “I believe that this summit will spread the message of peace, harmony and coexistence,” he said. “We’re pleased to present the highest honor in Sri Lanka to the secretary-general of the MWL for his role in promoting interreligious peace.”
MWL Secretary-General Dr. Mohammed bin Abdul Karim Al-Issa also delivered a speech. “This important summit on interfaith peace confirms the determination of followers of religions to clarify the truth of religions, which call for love, peace and harmony,” he said.
The summit “has come to diagnose the current situation and find solutions to it, and to express the determination of the attendees to act effectively against the forces of terrorist evil, as well as to reveal the facts with transparency,” Al-Issa said. “This conference affirms the stability and dominance of good.”
(Extracted from arabnews.com)