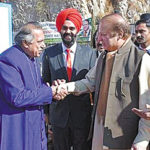 Pakistani Prime Minister Nawaz Sharif visited the Katas Raj Hindu temple in Chakwal district of Punjab last month, to inaugurate its renovation. The work includes installation of a water filtration plant in the Amrat Jal area. Mr. Sharif said his government was pursuing a policy to establish Pakistan’s identity as a minority-friendly country.
“Salam, Namaste, Sat Sri Akaal and good morning to all my brothers belonging to different religions,” the Prime Minister told a cheering audience. “I am the Prime Minister of all Pakistanis … be it a Muslim, Hindu, Sikh, Christian or [those of] any other religion. You are all equal,” he said.
The Katas Raj temple is revered by Hindus across the globe as legend has it that the foundation of the sacred site was laid by Lord Shiva. Mr. Sharif said the temple was over 5,000 years old and had been the focal point of four civilisations. Al-Biruni, Persian scholar and polymath, had computed the earth’s circumference from here. The Prime Minister said all efforts must be made to restore the temple to its original glory. He had directed the chairman of the Evacuee Trust Board to preserve, renovate and expand holy places of various religions.. The Pakistani Minister for Religious Affairs and Interfaith Harmony, Sardar Muhammad Yousuf, said his Ministry had instituted special funds for the welfare of the minorities.