Bolawaru Mahammad Kunhi is a Kannada writer who debunked myths and harmonized relationships between communities. 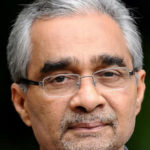 Bengaluru: Noted Kannada short story writer, Bolawaru Mahammad Kunhi (pronounced ‘Kunji’) has been conferred with the prestigious Sahitya Akademi Award for the year 2016 and is one among the 24 language award winners for the year.
Kunhi, who retired as senior chief manager of Syndicate Bank in Bengaluru, hails from the Beary Muslim community, mainly living in the coastal Dakshina Kannada (DK) district of Karnataka. The award for his epic Kannada novel, Swatantrayada Ota (‘Race for Freedom’), which runs into 1,111 pages, recounts the saga of nearly 200 characters in the imaginary Muttupady village. A Leftist-liberal, Kunhi was initially a stage actor and used to stage roadside plays as part of a Leftist stage group. His early writings exposed several dichotomies in the Muslim mindset and simultaneously debunked several illusions and misgivings about Islam and Muslims among others. He is a prolific writer and wrote several short stories for Taranga, a Kannada magazine published by the Manipal Group.
In 2012 too he was given the Sahitya Akademi Award for his book Paapu Gandhi, introducing Mahatma Gandhi to children.
Kunhi did his MA in Kannada from Mysore University and was a gold medallist in the subject. He has penned almost 250 short stories. He was also the screenplay writer for the Kannada films Munnudi and Athithi, which won wide acclaim.
Commenting on the honour, Mr. B. M. Hanif, Incharge-Editor of Sudha weekly, published from the Deccan Herald Group of publications, said the award honours a writer of Kannada who has introduced several Muslim characters in the language. Speaking to Islamic Voice, Hanif said Bolawaru’s writings reflect his consciousness of human relations which span countries and continents. He has always attempted humanistic analysis of interactions between communities and nations. Hanif said that Kunji’s novels provide glances of history. He has even written a novel on Prophet Muhammad, titled ‘Odiri’.
Mr. Abdussalam Puthige, editor of the Kannada daily Vaartha Bharthi, (published from Bengaluru as well as Mangaluru) said the award was well-deserved. He said Mr. Kunhi is an extremely creative writer and is highly respected in the Kannada literary circles.