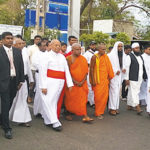 Sri Lanka’s religious leaders are stepping up their campaign for a drug-free society, joining thousands of others in a protest march against the increased use of illegal drugs, especially among school children. The country has been on the map for years as a transit point for major drug cartels. Cardinal Malcolm Ranjith, archbishop of Colombo, said he would form a parish youth committee that would identify drug dealers and inform authorities. He demanded strict punishment for drug peddlers. “We should not be afraid to continue the people’s fight at village level. We should not let a few politicians or drug dealers damage a large number of villagers. As religious leaders, we are in the front of this fight,” said Muslim leader Abdul Rahuman. Buddhist monk Kaluwarachchigama Sumanarathna Thera said it is sad that people of goodwill are frightened to raise their voices against drugs because powerful people are involved in the trade. “We are going to be the voice of the voiceless. A radical change of attitude is what we expect to gain from this protest march,” he said. Jude Fernando, a Sunday school teacher, said police are well aware of drug dealers but hesitate to catch them due to political interference.