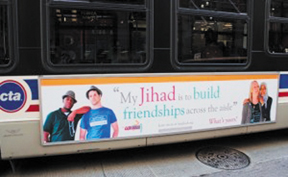 US Muslims have launched an advertising and social media campaign in the hope of reclaiming the word ‘Jihad’ from extremists, who insist on equating the spiritual quest with terrorism. The campaign features Muslims describing their personal struggles, the meaning of Jihad, on bus ads, Twitter, Facebook and a dedicated website: myjihad.org. “My Jihad is to build friendships across the aisle,” says one ad showing an African American man leaning on the shoulder of a Jewish friend. “MyJihad is to march on despite losing my son,” says another ad, featuring a portrait of a mother with her three remaining children. “MyJihad is to not judge people by their cover,” says a third, framed by two women in headscarves. It was sparked by a series of hateful ads calling Muslims “savages” and urging people to “defeat jihad” that were plastered on buses and trains in New York, Chicago and San Francisco. But it also speaks to a larger frustration among “mainstream” Muslims with how a basic tenet of their faith has been distorted and demonized, said Ahmed Rehab, executive director of the Chicago branch of the Council on American-Islamic Relations.