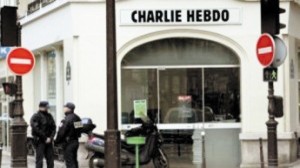 Strasbourg: Accusing it of blasphemy, a French Muslims legal organization is suing a French satirical magazine, “Charlie Hebdo” after it published inflammatory cartoons insulting the Qur’an. “We know in advance that the trial does not go all the way to the extent that the Muslim religion is not in the arrangement (that recognizes and regulates the Catholic, Reformed Church, Lutheran and Jewish),” Samim Bolaky, a lawyer practising in Paris and General Secretary of Muslim Judicial Defence League (LDJM), stated. “We took the opportunity to complain to the judge to decide on the question: what is the role of Islam in the concordat?” “Muslims aspire to have the same rights as other believers,” Bolaky added. Bolaky spoke as a court in Strasbourg set the hearing into Charlie Hebdo’s alleged blasphemy for 7, April, 2014. The Concordat of 1801 is an agreement between Napoleon and Pope Pius VII, which solidified the Roman Catholic Church as the majority church of France and brought back most of its civil status.