Interfaith Iftars aim to bring communities together this Ramadan 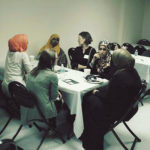 With Ramadan quickly approaching, when Muslims around the world will fast from sunrise to sunset, Rev. Cynthia Bronson Sweigert has her plate full. For the second year in a row, the Minnesota-based Episcopal priest is organizing a state-wide effort to bring Christians and people of other faiths into mosques during the holy month. And if last year’s program is any indication, close to a thousand non-Muslim Minnesotans will be breaking bread with their Muslim neighbors this summer. “Christian-Muslim understanding is critical at the moment because of rising Islamophobia,” Bronson Sweigert told The Huffington Post. Bronson Sweigert is coordinating the Minnesota Council of Churches. Fifteen mosques have signed up to host these free interfaith iftars so far, opening their doors for non-Muslims to join them in the ritual breaking of the fast after a long day of prayer and worship. To spread the word about the program, Bronson Sweigert and her team are sending invitations to roughly 3,000 people, They are also notifying churches, synagogues and other houses of worship in the closest zip codes to every participating mosque and providing them with posters, bulletin inserts, material for their websites, and anything else that will help them publicize the events to their communities.
(Antonia Blumberg is Associate Religion Editor, The Huffington Post)