On A Reactionary Path

Islamic Voice 0 November, 2012 12:00 am
British MPs not serious about Islamophobia
French Muslims urge Islamophobia to be recognized as a crime
US Critical of Veil Ban in France, Belgium

Some individuals may indulge in sacrilege. But on official level the West has not
been found wanting in endorsement of Muslim presence and influence of Islam.

The trashy film Innocence of Muslims has caused a good amount of outrage around the world. The mayhem in Pakistan has claimed 17 lives. The American envoy to Libya was killed with three other diplomats in Benghazi. The American consulate in Chennai was shut
down for three days following violent protests. A Pakistani minister announced a million dollar award for the head of the blasphemer. A police station was set ablaze in Ahmadabad by a riotous mob. A few of these are amazing too. That a US envoy should be killed in Libya soon after that country’s US-aided freedom from the despotic rule of Qaddafi and a mob of Muslims burning a police station in a state where they have been at the receiving end of highhandedness of police’s biased action in not  a too distant past should set us
thinking. The Internet and social media have vastly expanded our access to what even individuals say, sing, draw or produce. A series of odd cartoons here, a derogatory film there or a blasphemous book elsewhere do cause hurt but should not lead to social
turmoil. Outrage should not be allowed to become an industry. Internet has no borders and is totally unregulated. But uncivil behavior is dealt with varying set of laws in various settings. A variety of mischief-mongers thrive on odd aspects of various
faiths. Violent protests are like showing a red rag to the raging bull. It is therefore pertinent to ask if violence could end the acts of sacrilege. Should the envoys be murdered for flagrant behaviour of some odd  elements? Is it fair to lay the blame for every vicious act by an individual at the door of the state that he or she comes from? Rage against the US is understandable. But it is unfair to camouflage the real motives with such disruptive behavior. It looks like some of us have made it a habit to bark up the wrong tree. 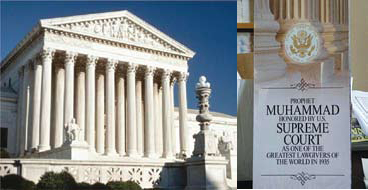 Last year, I devoted a day to visit the official buildings in the Washington DC. Majestic  Capitol building was the first stopover. The imposing edifice of the US Supreme Court stands opposite to it. Behind the mahogany table where judges  sit, a series of stone  sculptures in the form of friezes of 18 lawgivers, from Hammurabi to John Marshal, bedeck the wall. One of these lawgivers is Prophet Muhammad who appears between Charlemagne and Justinian. The friezes were  carved in 1930 in order to honour the ancient  lawgivers in their own way. There were no Muslims around then to tell  them that making images of the Prophet is prohibited. Someone
objected to the portryal of the Prophet in 1997. But the Supreme Court Chief Justice  Rehnquist reminded that itwas unlawful to remove or in any way injure an architectural feature in the Supreme Court. I strolled ahead. On a grassy area opposite the White House
are installed sculptures of a Christmas Tree, the Jewish religious symbol of Hanukkah and a crescent and star. The crescent and the star were installed only in 1997 in recognition of the increasing numbers, visibility and influence of Muslims in the United States.

Western liberalism is a two-way traffic, allowing space for blasphemers as well as defenders and promoters of faith.

It is not that the West is all out to insult Islam and its Prophet. On official level, the West has increasingly recognized Islam and  Muslims’ presence in its midst. True, ban was slapped on minarets and veil in Switzerland and Belgium respectively. It is also true that blasphemous cartoons were published in Denmark and the sacrilegious book from Salman Rushdie is still in circulation. But it is
the same US where a session of the Congress was started with the recitation of the holy Quran, where the right of the first Muslim member of the House of Representative Keith Allison to take oath on the holy Quran was recognized. Was it not Germany that  recognized Muslim holidays and allowed introduction of Islamic syllabi for Muslim students? Was it not France where Louvre Museum
opened the 100 million Euro Islamic Art Gallery last month? Was it not the Great Britain that provided asylum to Rachid Ghanouchi, the current prime minister of Tunisia during his years of exile? The West may be accused of several counts of blasphemy. But their view of the world is not monochromatic. Liberalism is a two-way traffic there. It has been and continues to be the home to the most innovative projects on Islam and Muslims and asylum for the enlightened Muslim intellectuals. Dr. Fazlur Rahman fled Pakistan during
the repressive regime of Gen. Ziaul Haque and found a place in Chicago University. Six of his volumes on Islam are  considered the most respected tomes on contemporary Islamic thought. Prof. Syed Hussain Nasr who left Iran during despotic rule of the Reza Shah
Pehlevi did not return to Islamic Iran. He continues to write on Islamic art and philosophy in the US. Dr. Maher Hathout, the Palestinian professor, stays put in the US despite pro-Israel stance of the US. Prof. Khaled Aboul Fadl, the Saudi Sufi scholar, has no intention to return to the Saudi haven. He chose to exchange the opulent life of the Kingdom with liberal academic atmosphere and
Spartan life of the US. The most gender sensitive postulates of Islam came out of the pen of Nimat Hafez Barzangi at her tenure in the Florida University. Most of his writings would not have seen the print of the ink anywhere in the Muslim world. Several projects to compile encyclopedia of Islam and Islamic world were conceived in Saudi Arabia during the last three decades. None materialized. Why? Because, the terrain inside the Islamic world is not hospitable to liberal interpretation of Islam, schisms within it and modern
accretions. No scholar worth its salt can write objectively about Shias, Ahmediyas, Druze, Alawites, Mehdevis, Barelvis anywhere in the Islamic world.

Hindus did not come out on street condemning ban on the Bhagwad Gita in Russia. Nor were there protests in Amritsar against shooting at the Oak Creek Sikh Temple.

But, yes, Prof. John Esposito of George Washington University did compile the Oxford Encyclopedia of the Modern Islamic World with the help of 400 authors. Prof. Amina Wadud could lead a mixed gender congregation of salah in the US and survive. But a Negiub Mahfooz has to be wary of a stabber every moment in Egypt. If the milieu in the West has space for a Rushdie, it also sustains the space scientist Dr. Nazeer Ahmed (from Tumkur in India) while he translates the holy Quran into American English. The intention is not to defend the attempts at blasphemy. It is reprehensible, no doubt.  The West needs to bring up legislation to cover the persona of founders of all religions to protect from sacrilege as it does with the Jesus Christ or as it prohibits underestimation of the Holocaust. But we too need to do some introspection. Should a ragtag film evoke this huge a response and so violent? Are we not being too reactionary? Did the Hindus come out on streets condemning Russian courts for a ban on Bhagwad Gita? Did the Sikhs protest against
the killings by a hatemonger in Oak Creek? Did not they convey their disapproval more subtly? Is it not that the mutual competition among sectarian groups of Muslims that fuels the overdrive? Is it not the fear of the rivals going one up that triggers the reactionary instincts in some of us? Are we being driven by fear of siding with the blasphemers in the event of keeping mum? These factors need deeper analysis. The writer can be contacted at [email protected]