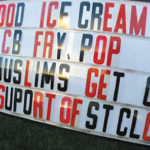 Minnesota: A restaurant owner in the United States, who posted ‘Muslims get out’ sign outside his eatery, has been invited to a mosque to learn more about Islam and the Muslim community. Executive Director of the Council of American-Islamic Relations in Minnesota (CAIR-MN) Jaylani Hussein plans to invite Ruedinger to a mosque in Faribault. Dan Ruedinger, the owner of the Treats Family Restaurant. He had put up the controversial sign because he was upset over the stabbings at a St. Cloud mall in Minnesota. “We are not targeting the Muslims in general, just the extremists,” Dan Ruedinger has said. “CAIR-MN hopes a meeting with local Muslims will change the business owner’s view of the state’s Islamic community, it said. “Our experience has shown that interaction with ordinary American Muslims and enhanced knowledge of Islam are key factors in the reduction of Islamophobic attitudes,” Hussein said.