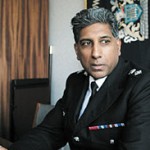 Dal Babu, one of the most senior police officers in the UK police force, has resigned after 30 years in the service in protest against the prevailing bias against the recruitment of officers from ethnic minorities. His resignation came after refusal of his request to be promoted to chief officer rank. The high-ranking officer has been a prominent and eloquent spokesman for Muslim police officers with wide public exposure. He was also awarded an OBE in recognition for his efforts to encourage the soaring public confidence ratings in the London borough of Harrow which he runs. In spite of holding a master’s degree and speaking four languages, he was considered unsuitable to assume chief officer rank because his media interview skills were not deemed good enough. He was also refused a place on the strategic command course for the next generation of chief constables. Only 2.8 percent of police leadership is from black or minority ethnic backgrounds.