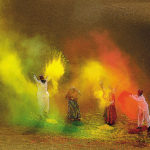 Jodhpur: Photographer Mohammed Shariff’s entry “Desert Holi” has won the Gold Medal at the 6th Arabella International Photographic Competition held under the aegis of Global Photographic Union of Turkey. The award carries a citation, a medal and one thousand dollars.
The competition recieved 5805 photographs from 754 photographers from 39 countries. The photograph depicts villagers playing Holi in the outskirts of the desert city of Jaisalmer. The awards were announced on May 6. The award presentation ceremony was held in the city of Izmir.