The World’s Muslims: Unity and Diversity

While there is broad agreement on the core tenets of Islam, Muslims across the
39 countries and territories surveyed, differ significantly in their openness to
multiple interpretations of their faith and acceptance of various sects. 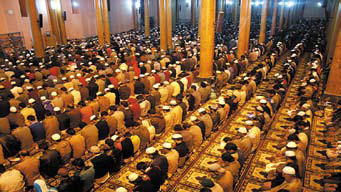 The world’s 1.6 billion Muslims are united in their belief in God and Prophet Muhammad (Pbuh) and are bound together by such religious practices as fasting during the month of Ramadan and almsgiving to assist people in need. But they have widely differing views about many other aspects of their faith, including how important religion is to their lives, who counts as a Muslim and what practices are acceptable in Islam, according to a worldwide survey by the Pew Research Center’s Forum on Religion and Public Life,
Washington DC, and released last month.

The survey, which involved more than 38,000 face-to-face interviews in over 80 languages, finds that in addition to the widespread conviction that there is only one God and that Muhammad is His Prophet, large percentages of Muslims around the world share other
articles of faith, including belief in angels, heaven, hell and fate or pre-destination. While there is broad agreement on the core tenets of Islam, however, Muslims across the 39 countries and territories surveyed differ significantly in their levels of religious commitment, openness to multiple interpretations of their faith and acceptance of various sects and movements. Some of these differences are
apparent at a regional level. For example, at least eight-inten Muslims in every country surveyed in sub-Saharan Africa, Southeast Asia and South Asia say that religion is very important in their lives. Across the Middle East and North Africa, roughly six-in-ten
or more say the same. No more than half of those surveyed in Russia, the Balkans and the former Soviet republics of Central Asia say
religion is very important in their lives. The one exception across this broad swath of Eastern Europe, Southern Europe and
Central Asia is Turkey, which never came under communist rule, fully two-thirds of Turkish Muslims (67%) say religion is
very important to them. There are also differences in how male and female Muslims practise their faith. In most of the 39 countries surveyed, men are more likely than women to attend mosque. This is especially true in Central Asia and South Asia, where
majorities of women in most of the countries surveyed say they never attend mosque. However, this disparity appears to result
from cultural norms or local customs that constrain women from attending mosque, rather than from differences in the
importance that Muslim women and men place on religion. 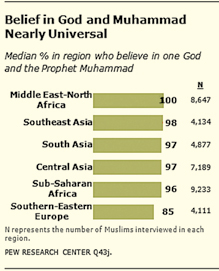 Sectarian Differences The survey asked Muslims whether they identify with various branches of Islam and about their attitudes toward  other branches or subgroups. While these sectarian differences are important in some countries, the survey suggests that many Muslims around the world either do not know or do not care about them. In some of the se countries, decades of communist rule may have made sectarian distinctions unfamiliar. But identification as “just a Muslim” is alsop revalent in many countries without a communist legacy. For example, in Indonesia, which has the world’s largest Muslim population, 26% of Muslims describe themselves as Sunnis, compared with 56% who say they are “just a Muslim” and 13% who do not give a definite response.

Differing Views on Orthodoxy The survey asked Muslims whether they believe there is only one true way to understand Islam’s teachings or if multiple interpretations are possible. In 2 of the 39 countries surveyed, half or more Muslims say there is only one correct way to understand the teachings of Islam. This view, however, is far from universal. In the Middle East and North Africa,
majorities or substantial minorities in most countries “ including Tunisia, Morocco, the Palestinian territories, Lebanon and Iraq “ believe that it is possible to interpret Islam’s teachings in multiple ways. In sub-Saharan Africa, at least onein- five Muslims agree. In South Asia, Southeast Asia and across Southern and Eastern Europe, at least one-in-six in every country surveyed believe Islam is  pen
to multiple interpretations. In some Central Asian countries, slightly fewer Muslims say their  faith can be subject to more than one interpretation. But in Kazakhstan (31%), Turkey (22%) and Kyrgyzstan (17%), the percentage that holds this view is on par with countries in other regions. In the United States, by contrast, 57% of Muslims say Islam is open to multiple interpretations.

Core Beliefs The survey asked respondents in all 39 countries whether they believe in the existence of angels. In Southeast Asia, South Asia and the Middle East-North Africa region, belief in angels is nearly universal. In Central Asia and sub-Saharan Africa more than seven-in-ten also say angels are real. The expression “Inshallah” (“If God wills”) is a common figure of speech among Muslims and reflects the Islamic tradition that the destiny of individuals, and the world, is in the hands of God. And indeed, the survey finds that the concept of predestination, or fate, is widely accepted among Muslims in most parts of the world. In four of the five regions where the  question was asked, medians of about nine-in-ten (88% to 93%) say they believe in fate, while a median of 57% express this view in Southern and Eastern Europe. The survey also asked about the existence of heaven and hell. Across the six regions included in the study, a median of more than seven-in-ten Muslims say that paradise awaits those who have lived righteous lives, while a median of at least twothirds say hell is the ultimate fate of those who do not live righteously and do not repent. Central Asia along with Southern and Eastern Europe have relatively low levels of religious commitment, both in  terms of the lower importance that Muslims in those regions place on religion and in terms of self-reported religious practices. With the exception of Turkey, where two-thirds of Muslims say religion is very important in their lives, half or fewer across these two regions say religion is personally very important to them. This includes Kazakhstan and Albania, where just 18% and 15%, respectively, say religion is central to their lives. Generational Differences in Religious Commitment Of all the countries surveyed, only in Russia do Muslims ages 18-34 place significantly more importance on religion than Muslims 35 and older (48% vs. 41%). Younger Muslims in Russia also tend to pray more frequently (48% do so once a day or more, compared with 41% of older Muslims). Elsewhere in Southern and Eastern Europe and Central Asia, the older generation of Muslims generally places a greater emphasis on religion and  engages more often in prayer. For example, Muslims, ages 35 and older are more likely than younger Muslims to pray several times a day in Uzbekistan (+18 percentage points), Tajikistan (+16) and Kyrgyzstan (+8). The Pew Forum’s survey of the world’s Muslims includes every nation with a Muslim population  of more than 10 million except Algeria, China, India, Iran, Saudi Arabia, Sudan, Syria and Yemen. Together, the 39 countries and territories included in the survey are home to about two-thirds of all Muslims in the world.

Global News and Affairs 657 Islam and The West 124