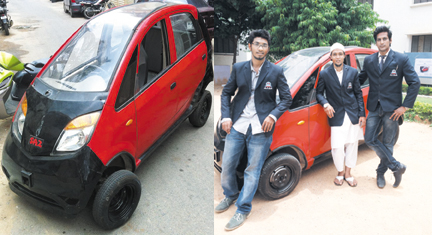 Three months of hard work, dedication, will power and team work by three students of HKBK College of Engineering has resulted in Saz”¦ the ultimate city car that is safe and stable!
The car named Saz has been conceived and made by Syed Arifullah, Syed Zeeshan K and Sanu Rahman, all BE (Mech) final year students of HKBK College of Engineering in Nagwara, Bangalore. This was part of their college project work.
“The entire car was made out of scrap from the scrap market, with tilt suspension. The objective of our project was to build a vehicle which would be a convergence of a car and a motorcycle. It is designed in such a way that two or three people can be accommodated one behind the other. It’s a half width vehicle, which is half the width of a conventional car design, saving traffic space due to its unconventional dimension. It has a small and compact sized 150 cc auto 2 stroke engine, which in turn saves fuel consumption. This engine can run with petrol, as well as LPG giving the driver a wider choice of selecting fuels. This prototype car has an innovated independent front and back tilt suspension system which allows the car to maneuver like a motorcycle with the protection and safety of a car,” explains Syed Arifullah, one of the students in the team.
The aesthetics of the car are appealing to the demand of the customer and it will be a boon for the present situation of over pollution due to automobile emissions and global traffic congestion.  All the above features are offered in a single package with a cost of a two wheeler. “We were inspired to build this car because of the congested traffic roads of Bangalore, many deaths have happened because of these traffic congestions especially the two wheelers. Our main aim is to target the middle-class sections of India so that they can afford a safer, stable, better car instead of buying a two wheeler,” says Syed Arifullah.
The students began the official project three months ago after their synopsis on the “The Conceptual Car” was accepted by the head of the department of mechanical engineering. The trio built the entire car from scratch, i.e, engine fabrication, chassis design, the unique floating suspension, body fabrication, steering, transmission, aesthetics, electronics, interiors and the logo design too. They named the car after their initials as SAZ, the ultimate city car. They had no sponsors for the car, so the entire budget of the project was about 1.5 lakhs including R and D, wastage and scrap. Apart from their project guides, their parents supported their efforts too. This project of SAZ was considered as one of the best projects of the college.
(Syed Arifullah and his team can be reached at 9916377926)