Walk down the narrow paths, riddled with giant pot-holes, that wind through the sprawling slums of Rajendranagar and LR Nagar and you’ll discover a totally different world from the malls and fancy eateries just beyond. It is in this area that Swabhimaan, an NGO, headed by Venkatraman Iyer has been working for several years now, bringing hope to many. 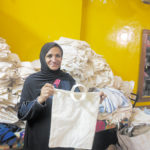 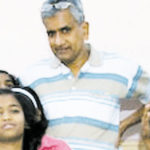 You have to see it to believe it”the grinding poverty, the terrible stench, the almost non-existent basic infrastructure, the mountains of accumulating garbage”¦Who would think that such misery abounds in the fringes of Koramangala, considered to be one of Bangalore’s most economically-affluent localities? Walk down the narrow paths, riddled with giant pot-holes, that wind through the sprawling slums of Rajendranagar and LR Nagar and you’ll discover a totally different world from the malls and fancy eateries just beyond. It is in this area that Swabhimaan, an NGO, headed by Venkatraman Iyer (or Venkat as he is also called) has been working for several years now, bringing hope to many.
Gainful Employment
Swabhimaan works on several fronts: it provides English teachers to several schools in the area that lacked this facility and awards scholarships to children. It runs a free clinic and distributes groceries free of cost to some 500 families every month. Every day, its volunteers distribute cooked food to around 150 families in the area.
One of Swabhimaan’s latest initiatives is a cloth-bag making unit, which is providing gainful employment to some 40-50 women. It was Venkat’s response to the huge piles of rubbish that dotted the area, much of it consisting of plastic bags.
“When efforts were being made to ban the use of one-time plastic carry-bags, traders were in quandary,” Venkat says. “They wanted to know what the alternative could be”something available easily and at reasonable price. We realized that this was a huge opportunity to avail the services of a large number of women from economically very poor families in the slums we work in. Most of their husbands are daily-wage earners. Some of their husbands don’t earn at all. Some of the women are widows. Most of the women had sewing machines, but very little work they could do with them. We started the bag unit to provide such women a chance to work and earn while being in their own homes.”

Bringing Meaning into their Lives
Swabhimaan provides the women with the cloth, needles and thread. The women collect the cloth every morning, stitch the bags in their homes on their machines and deliver them back in the evening. If they stitch around 50-60 bags a day, they can earn between 100-150 rupees daily. Swabhimaan has teamed up with shops in the city to buy the bags, which they, in turn, sell to customers.
Around 60 years old, Gulnaz Begum heads the bag-making unit. She believes that this unit has brought meaning to her life. After all her children had married off and moved away to their own homes, she was feeling depressed, but now having to manage the unit, which keeps her usefully occupied much of the day, she has found a new lease of life, as it were. 30 year-old Arbina Khanam, mother of two, earns around 200 a day working on the bags, which helps her send her kids to school. Sagai Mary, a young widow with three kids, is the sole breadwinner in her family. She works as a maid in homes in the neighborhood and stitches bags in her spare time, earning about 100 rupees a day.

Empowering Women Economically
“This is a complete social and not-for-profit enterprise,” Venkat explains. “The income that the women earn is far more important, because 100% of it is used by them on their families, which is rarely the case with men’s income. Often, men spend their money on cigarettes, tea and drinks, but women spend all they earn on their children and on buying food for the family. That’s one reason why it is so important to empower them economically.”
“Using reusable cloth bags instead of plastic bags is much more environmentally-friendly. They take plastic out of the system,” Venkat says. “The bags give women an income source and also ensure that shopkeepers have a good quality alternative that’s available at a price”ranging from 10 to 20 rupees per bag, depending on the size”and that makes it fairly easy for them to transit from plastic to cloth-bags.”
“Right now we make and sell some 800-1000 bags a day, and we want to expand the programme,” Venkat continues. “We appeal to shopkeepers and customers to buy our bags, which are far more durable than plastic bags and are very reasonably priced. We also appeal to people who can help fund this initiative so that it can provide employment to many more women.”
(Venkat can be contacted [email protected])
For more details about Swabhimaan, seehttp://www.swabhimaan.org/