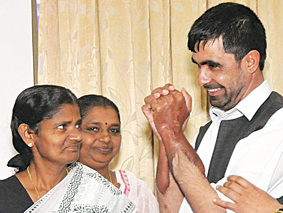 Kochi: Abdul Rahim who lost his hands while defusing mines, got them back after a complicated hand transplant procedure.
The second double hand transplant in the country was successfully completed at the Amrita Institute of Medical Sciences here on April 10. The recipient of the hands is Abdul Rahim, a 30-year-old from Afghanistan, who lost his hands three years ago while trying to defuse mines as part of his duties with the Afghanistan Border Security Force. Doctors treating him said that by his account he had defused about 2,000 mines in his career. He arrived in Delhi in 2014 and his search for a hand transplant had failed when a Delhi-based plastic surgeon referred him to the hospital here. Mr. Rahim has been waiting in Kochi for a suitable donor. The donor is the family of 54-year-old Joseph from Eloor, who succumbed to brain death in a road accident. A team of 20 surgeons and eight anaesthetics led by Dr. Subramaniam Iyer completed the complicated hand transplant procedure. Rahim greeted the family members of the donor with folded hands after he shook hands with Dr. Iyer and his team members. Dr. Iyer said the family had readily agreed to donate the hands. He said Mr. Rahim would need intensive physiotherapy for another nine to 10 months for which he planned to stay back in Kochi near the hospital.
(www.thehindu.com)