Islamic Voice 0 June, 2015 12:00 am
King Faisal Prize Winners 2020
Use of Cellphone – Essential Guidelines
Man from UP Bridging Gap between Muslims and Jews 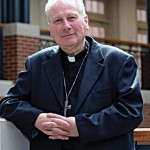 University Heights, Ohio: There’s a book that Archbishop Michael L. Fitzgerald believes can inspire Christians to appreciate the God of all creation. And it’s not just the Bible. Archbishop Fitzgerald, who retired at the end of 2012 as the papal nuncio to Egypt, said the Quran, with all of its names for God, can help Christians deepen their faith and inspire them to see God in new ways.
Since retiring, the England-born archbishop has been leading retreats on the names of God in Islam and contrasting the same or similar names for God found in the Old Testament and the New Testament.
Archbishop Fitzgerald, who is fluent in Arabic, spent the past eight months finalizing a book on the subject while serving as the Walter and Mary Tuohy chair of interreligious studies and guest instructor at Jesuit-run John Carroll University in suburban Cleveland. He taught a course on the Quran during spring semester, giving Christian and Muslim students the chance to reflect on the teachings of Islam.
He said his aim is to broaden understanding among people of different faiths, much as it was, when he taught at the Pontifical Institute for Arabic and Islamic Studies in Rome, his time as a missionary priest in Sudan, his 19 years as secretary and then President of the Pontifical Council for Interreligious Dialogue and as nuncio during Egypt’s Arab Spring.
Understanding and accepting people of other faith traditions and their religions “is what we are supposed to be as church,” Archbishop Fitzgerald told Catholic News Service, in an interview on the John Carroll campus as he was ending his time at the university.
“This is what we are supposed to be as church. I think you come back to ‘Lumen Gentium’ (Vatican II’s Dogmatic Constitution on the Church), the church is the nature of a sacrament. It is a sign of what God is doing. And God doesn’t only work in the Catholic Church. God works through the Spirit in other religions as well, and we must be open to that.
“That means we must relate to people. We are not meant to be a club. We are meant to be engaging in relations.”
For Archbishop Fitzgerald, 77, much of his 54 years as a priest has been spent engaging in interreligious relations.
(catholicphilly.com/2015/05/news/national-news)