Islamic Voice 0 November, 2015 12:00 am
The First Mosque to be Designed by a Woman
Spread the Divine Message
UK Prime Minister and London Mayor Take Part in “Visit My Mosque” Day 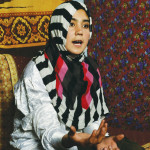 14-year-old Afghan girl, Aziza Rahimzada, has been nominated for the International Children’s Peace Prize.
At the age of just 14, Afghan rights activist Aziza Rahimzada has already surmounted legal hurdles preventing 25,000 refugee children from attending school, and cajoled authorities into providing tap water to a camp housing more than 100 families. Now she has been nominated for the International Children’s Peace Prize — an award previously won by Malala Yousafzai — and, like her Pakistani counterpart, hopes to spread her message of universal education and fundamental rights for Afghanistan’s youth. “These children are the products of war,” Aziza said during an interview with AFP from the Kabul camp for internally displaced people where she was born after her family fled fighting in the Parwan province in 2001.