Partition Museum in a Hamlet

A Punjab village has its own Partition museum “ a monument of harmony. 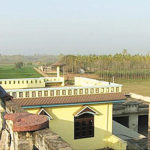 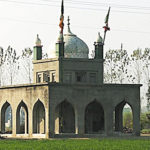 Sunni is a small village spread over 91 hectares in the sub-mountainous Kandi area in Hoshiarpur district and has a population of less than a thousand. Like all other villages and towns of Punjab, it too was witness to the tragedies of communal strife at the time of Partition. What sets this hamlet apart is that it has taken a lead in building a memorial gate and restoring monuments that were sites for the discord.
Hoshiarpur has a long tradition of building gates to commemorate events and heroes. There are several gates named after the patriots of the Ghadar movement and others. Going past the village, one may just take it to be another of those gates, but it is the name that strikes a bell among the minds of those who are in touch with Punjabi literature. It is called ‘Darwaza Amar Katha’ and ‘Amar Katha’ is the name of a Partition story by writer Gulzar Singh Sandhu, which along with his story ‘Shaheed’, are accounts of the killings and loss of 1947 as seen through the eyes of a 12-year-old.
A celebrated writer, Gulzar is best known for these two stories that touched the heart with their brutal honesty. The collection of his stories named ‘Amar Katha’ was given the Sahitya Akademi award in 1982.
Ask Brahmdeep Singh Sandhu, 48, who worked for years as a prison officer in England and has been living at his farm in Sunni for the past four years, what does he feel about this memorial to the Partition and his reply is: “These memories are undoubtedly very sad, but are nevertheless a part of the village history and heritage. They also remind us of times when different faiths lived in harmony and give a message to the village to keep up its tradition.”
Former sarpanch Ramandeep Singh Sandhu, who is nephew of the writer, says: “The maseet (mosque) in the village was renovated as well as the memorials of our forefathers (Sandhus) who established this village. This sends a message of co-existence and peace to the region.”
Gulzar (82), who penned the pain of the village, says “I was a just a 12-year-old and those incidents left a terrible impression on me. I saw my best friend Noora being killed in front of me and his sister with whom I was infatuated, being abducted by marauders from outside.
He adds, “Our village had a large population of Muslim vegetable growers and they had joined the rest of the village on August 15, 1947 in the Independence celebrations. Later, it was suggested that they convert to Sikhism so that their lives could be saved in those communally charged times. The Muslims did so and were given iron bracelets and yellow patkas.” However, a band of goons from outside the village later identified them and killed them, he regrets.
The writer goes on to say, “Redemption came to Sunni when people of the village were able to protect two Muslim girls, who were abducted and somehow fled and came back seeking help from the village elders. Not only did the villagers give them shelter, but attacked the abductors when they came again to forcibly take the girls away. They killed the three men and the girls were safely escorted to Pakistan.”
How did the building of the gate and monuments come about? “It was my wife, medical practitioner Surjeet Kaur, who took the initiative and the villagers joined in,” he adds.
(Source: Hindustan Times)