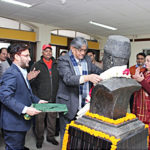 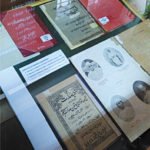 New Delhi: An academic robe and badge worn by Hakim Mohammed Ajmal Khan, founder and first Chancellor of Jamia Millia Islamia, at its first Convocation in 1921, texts of his speeches during the freedom struggle, and poems penned by him were among the exhibits on display at the university’s Premchand Archives and Literary Centre, to commemorate his 150th birth anniversary by Jamia Millia Islamia.
Vice Chancellor JMI, Prof Talat Ahmad along with Mr Masroor Ahmed Khan, the Hakim’s eldest son’s grandson, on February 12 inaugurated the fortnight-long exhibition. They were given a guided tour of the exhibition by the Centre’s Director, Prof Sabiha A. Zaidi who has made a concerted effort to curate the archival material so that the current students of JMI are able to appreciate the great legacy of the Hakim.
A copy of his collection of Urdu poems: Dewan-e- Shaida published from Maktaba Jamia in 1926  was on display. Some poems from his dewan which have been enlarged and displayed were rendered aloud by students and faculty members. Apart from this, there were books by Hakim Saheb as well as books on him. There were also images of the newspaper Akmal-ul Akhbaar which was published by his family from Sharif Manzil, Delhi. A sculpture of Hakim Ajmal Khan in the Centre of the exhibition was the work of Prof. Gufran Kidwai, a former faculty of Fine Arts, JMI.
Speaking on the occasion, Prof Ahmad said that the university has been making several efforts to sustain and revive the legacy of one of its greatest founders and an extraordinary Hakim by introducing postgraduate and Ph D courses on Unani. He expressed hope that the exhibition will remind the students and teachers of the rich history of Jamia and its founders.
In recognition of his extraordinary service to the Unani tradition of medicine and to pay tribute to the legacy of its eminent founder, JMI has already launched PhD in Unani Medicine and Diploma programmes in Unani Pharmacy for which it is actively being supported by Central Council for Research in Unani Medicine (CCRUM), Ministry of Ayush, Government of India. The administrative block of the university that houses the Office of the Vice Chancellor and other top officials is named ‘Khayaban-e-Ajmal’, after its great founder. The exhibits included a copy of the first convocation addresses of Jamia by him in 1921 and his Presidential Address at the 36th Indian National Congress Session, Ahmedabad in 1921.
A letter from Mahatma Gandhi dated March 12, 1922 commending him for his role towards Hindu-Muslim unity and the need for a united India to fight the British were also a part of the exhibition along with many photographs with prominent national leaders of the time like Dr. M.A. Ansari, Motilal Nehru, Subhash Chandra Bose and Swami Shraddanand.