Man from UP Bridging Gap between Muslims and Jews 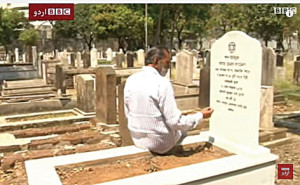 Mumbai: A 70 year old man from Jaunpur district in Uttar Pradesh is fighting all odds and has dedicated his life to bridge the gap between Muslims and Jews in the country.
In the aftermath of the Palestine crisis, Jews and Muslims are often seen as arch-enemies, although Jews had a history of peaceful coexistence in Muslim kingdoms for the whole of middle ages when they were being persecuted in Europe.
Screen grab from BBC YouTube channel
Mohammad Yasin, a 70 year old man who hails from Jaunpur District of Uttar Pradesh, has spent all his life in services of Jews Community in Mumbai by bidding them adieu in their last journey from this world.
Yasin writes last message of their eternal lives on the graves of Jews in the cemetery of the community in the Hebrew language. He learnt Hebrew and now writes the final message in Hebrew, Marathi, Gujarati and Hindi languages on their graves.
Yasin’s wonderful work was highlighted by BBC Urdu recently. Yasin came to Mumbai 35 years ago from Jaunpur and is now in no mood to go back. But instead, he aspires and dreams to visit Israel at least once before he dies. “I have never seen Israel before, people say it is a beautiful place so I want to visit it once in my life,” Yasin told BBC. He, however, has little hope that his dreams can ever come true.
Yasin earlier used to engage in other professions before coming to Mumbai, but because of low wages and deteriorating economic situation, he left his hometown and came to the ‘city of dreams’ to try his luck.
As if drawn by destiny, Yasin chose to work in a Jewish cemetery kicking aside all stereotypes that exist between both communities. What is interesting is that he has not only devoted his whole life shattering all biases, but is also giving training to his son to continue the work.
(Twocircles.net)