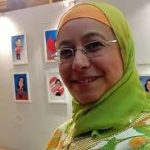 London: A Moroccan woman cartoonist, Riham El-Hour, has been named on the BBC’s 100 Women List for 2016. Every year, the BBC makes a selection among what it considers the world’s most influential and inspirational women, seeking to highlight their efforts and shed light on their projects. The 32-year old Riham El-Hour’spassion for cartoon started in her childhood. In 2000, she won an award from UNESCO for a poster on “heritage protection.” This award was life changing for the cartoonist.