Islamic Voice 0 May, 2018 12:00 am
Fasting in Shaban
Sikhs in Peshawar Arrange Iftar
A Mosque in Flood-Ravaged Kerala 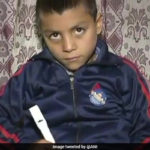 Nine-year-old Muzaffar Ahmad Khan from Bandipora’s Gurez (J and K) has invented a ‘counting pen’, a pen that counts words while writing. The prototype of the pen was displayed at the Festival of Innovation and Entrepreneurship, organized by NIF at the Rashtrapati Bhavan.
Twitter Ads info and privacy
At the festival, President Ram Nath Kovind heaped words of appreciation and rewarded young Muzaffar for his innovation.
Muzaffar says the idea of counting pen struck his mind when he got low marks in an exam as he could not manage the prerequisite word count. In my last exam, I got minimum marks as I wrote fewer words. It made me restless and I started thinking of inventing something which can save my time and finally ‘counting pen’ struck my mind,” he says.
The pen is supposed to help students during their exams when they have to maintain a word count of essays. Muzaffar says the counting pen will be available in the market in May 2018, as NIF has already decided to make it commercially available.