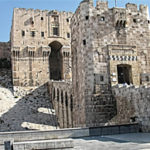 If the war ended tomorrow, how should Aleppo be rebuilt?

The battle-torn city of Aleppo lies in ruins. Nonetheless, former residents of the city and experts located in Budapest are already working towards the reconstruction of the 5000 year old metropolis.
Bombs are raining down on Aleppo, in Syria, while snow falls over Budapest, in Hungary. Almost 2000 kms separate the two cities. Approximately one million people “ half of the city’s population, has fled the war zone that Aleppo has become. A website – thealeppoproject.com – links the two with an apparently unimaginable question: if the war ended tomorrow, how should Aleppo be rebuilt? “The sooner we start thinking about it, the better it will eventually be for the city. We need finished concepts when the time comes,” says the exiled Aleppo native AlHakam Shaar from the Center for Conflict, Negotiation and Recovery (CCNR) at the Central European University in Budapest. The 29-year-old is one of the four initiators of this web site “ the culmination of a multidisciplinary project that emphasizes input by the citizens of Aleppo, especially refugees from the city.
(Extracted from qantara.de)