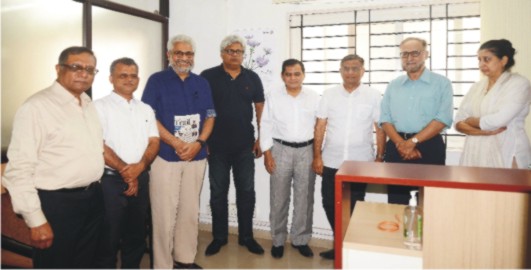 ‘The Wire’ Portal chief in Bangalore

Bengaluru: Mr. Siddharth Varadarajan and Mr. M. K. Venu, journalists with noted web portal ‘The Wire’ from New Delhi visited the office of the newly launched English daily ‘News Trail’ on Monday, March 28, 2022 and spent two hours with the directors and journalists of the daily.

Addressing a select gathering of citizens of Bangalore a day earlier, Mr. Varadarajan said independent media was under tremendous pressure just as efforts are being made to undermine the independence of the judiciary. He said ‘News Trail’ was a bold venture especially during a time when newsprint was extremely expensive and cost of production of physical newspapers was touching new limits. He said ‘The Wire’ too was facing financial stress.