Pine trees older than 100 years suffer an illness that causes the hard and thick bark to soften. This was only recently discovered by science, but woodpeckers have known it for centuries. 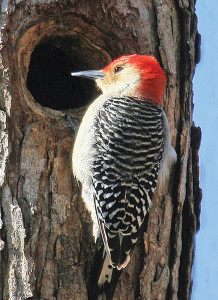 As we all know, woodpeckers build their nests by boring holes in tree trunks with their beaks. This may sound familiar to most people. But the point many people fail to examine is why woodpeckers suffer no brain haemorrhage when they beat a tattoo so vigorously with their heads. What the woodpecker does is in a way similar to a human being driving a nail into the wall with his head. If a man ventured to do something like that, he would probably undergo a brain shock followed by a brain haemorrhage. However, a woodpecker can peck a hard tree trunk 38-43 times in just two or three seconds and nothing happens to it.
Nothing happens because the head structure of woodpeckers is ideally created for such a task. The skull of the woodpecker has a remarkable suspension system that absorbs the force of the blows. Its forehead and some skull muscles adjoined to its beak and the jaw joint are so robust that they help lessen the effect of the forceful strokes during pecking.
Calculation and order do not end here. Preferring primarily pine trees, a certain species of woodpecker checks the age of the trees before boring a hole in them and picks those older than 100 years, because pine trees older than 100 years suffer an illness that causes the hard and thick bark to soften. This was only recently discovered by science and perhaps you may be reading of it here for the first time in your life; woodpeckers have known it for centuries.
This is not the only reason why the woodpeckers prefer pine trees. Woodpeckers dig cavities around their nests, the function of which was not originally understood. These cavities were later understood to protect them from a great danger. Over time, the sticky resin that leaks from the pine trees fills up the cavities and the outpost of the woodpecker’s nest is thus filled with a pool whereby woodpeckers can be protected from snakes, their greatest enemies.
Another interesting feature of woodpeckers is that their tongues are thin enough to penetrate even ants’ nests in the trees. Their tongues are also sticky, which allows them to collect the ants that live there. The perfection in their Creation is further revealed by the fact that their tongues have a structure which prevents them from being harmed by the acid in the bodies of the ants.
These woodpeckers prove with all their detailed features that they are ‘created’. If woodpeckers had evolved coincidentally as the theory of evolution claims, they would have died before they acquired such extraordinarily consistent traits and they would be extinct. However, as they were created by Allah, they started their lives by bearing all the vital characteristics suitable for their life.