Purtas and Zameem want to become scientists when they grow up and continue with their passion of making science documentaries! 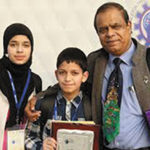 Srinagar: In the first week of September 2016, when protests were at peak in Srinagar district of Kashmir, Purtas Jalal, a 13-year old girl, was sitting idle at home in the Hawal locality of the city. The schools had been shut for more than a month, and with nothing much to do, the teenager, who studies in Class 8, decided to help her mother in cleaning the house with the help of her 10-year old brother Zameem Jalal, who is in Class 5. Both the kids study in Linton Hall School, Rajbagh, Srinagar.
As she was moving the heaps of newspapers collected in the house, she came across the cover of local magazine,Kashmir Life, which featured the story of Noori, the world’s first Pashmina goat. Pashmina is a fine type of cashmere wool.
The goat was called Noorie, meaning “the light”. The goat was cloned by the Sher-e-Kashmir University of Agricultural Sciences and Technology scientists led by Dr Riaz Ahmad Shah in March 2012.
Reading the news, Purtas was immediately struck with an idea and she called her younger brother Zameem and showed him the story. Both kids went to their father, Jalal ud Din Baba, a Valley-based top documentary filmmaker, and proposed the idea of making a science documentary film about the cloned Pashmina goat.
“I have deep interest in science and documentary making obviously because I have seen my father making documentaries and people applauding his work. I was initially thinking of making documentary on silk, but it was too dangerous for us to move outside the Srinagar district during the protest,” Purtas said. “But when I came across the magazine which had published the article way back in 2012.I was really impressed and decided to go for it,” she added.
The idea was ready, the plan and script was in place. When the kids and their father reached the university on the outskirts of the Srinagar, they found a big lock on the gate due to the ongoing protests.
“We contacted Dr Riaz Ahmad Shah, the man behind Noori in September this year. He was not in favor of doing the documentary during the unrests as the university was closed. But later in October they granted us permission,” Zameem Jalal said.
The kids started interviewing on October 12th and finished the film by October 15th.
The documentary film was titled Noori”The Light and was ready by third week of October and was later submitted for International Science Film Festival 2016, which was jointly organized by Department of Science and Technology, Department of Earth Sciences, CSIR. The film won the best film award in category B (film by students, colleges, universities of India) in the science film festival!
The young filmmakers were given a trophy, certificate of merit and also a cash prize of Rs 1 lakh by Dr. Harsh Vardhan, Union Minister for Science and Technology. Nearly 3,000 delegates were present on the occasion besides scientists and researchers.
Purtas and Zameem want to become scientists when they grow up and continue with their passion of making science documentaries!
(Extracted from twocircles.net)