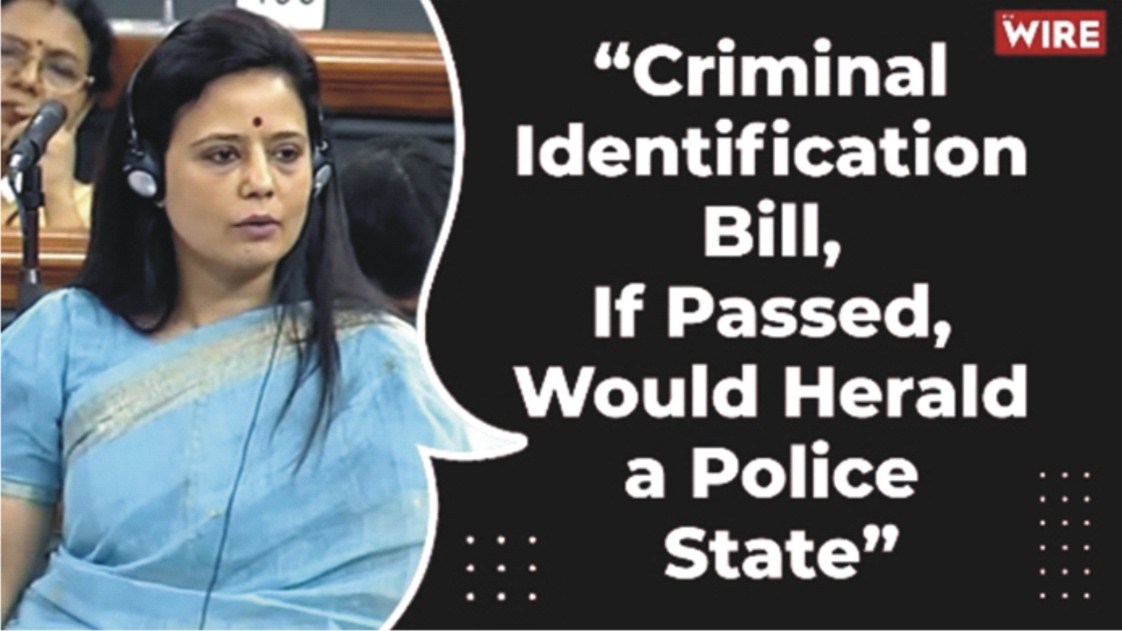 The Criminal Procedure (Identification) Bill, 2022, intends to link demographic and biometric information with the identification of citizens in an attempt to make all the natural citizens of India to be looked at as ‘suspects.’ The law is draconian and against the principle of civil liberties human Right and the tenets of Indian constitution. It is apparent that with such an Act, a permanent Emergency architecture is being constructed in the country.

On April 4, 2022, the Lok Sabha passed the Criminal Procedure (Identification) Bill 2022 with a voice vote. The opposition members strongly opposed the Bill in the Parliament, and their demand for sending the Bill to the Parliamentary Standing Committee was not given any consideration by the members of the treasury bench.

What is the Act all about?
The Criminal Procedure (Identification) Bill, 2022, seeks to empower India’s National Crime Records Bureau to collect, store, and preserve the record of ‘measurements’ and share, disseminate, destroy, and dispose of records.

It empowers a Magistrate to order any person to give the ‘measurements’ for investigation.

The Act empowers a head constable of a police station or a head warden of jail to take ‘measurements’ of convicts and those in preventive detention. If the said person resists, he can be charged under the Indian Penal Code.

The Bill aims to authorize for taking ‘measurements’ of convicts and other persons for the purposes of identification and investigation in criminal matters. It is to preserve records and on issues connected in addition to that. The definition of measurement indicates that it is likely linked to DNA Technology (Use and Application) Regulation Bill, 2019 as well.

According to Section 2 (b), ‘measurements’ includes finger-impressions, palm-print impressions, foot-print impressions, photographs, iris and retina scan, physical, biological samples and their analysis, behavioral attributes including signatures, handwriting, or any other examination referred to in section 53 or section 53A of the Code of Criminal Procedure, 1973.

The biometric-based measurement identification attempts to create unique identification numbers for each country’s citizens. The idea is to have unauthorized control over citizens by using these technologies. In sum, the Criminal Procedure (Identification) Act, 2022, attempts to make India a police state.

Why is the Act opposed?
The Act is opposed by civil rights groups and activists for being unconstitutional, and it is seen as an assault on the citizens’ privacy. The Bill is a direct violation of Fundamental Rights, and it is an open-ended provision that infringes on the liberties of an individual. It is an attempt to make India a surveillance state.

Bill’s words ‘biological samples and their analysis’ could extend to narco-analysis, brain mapping, and DNA tests. This is clearly violative of Article 20 (3) of the Constitution.

The provision in the Bill for retaining the ‘measurements’ for 75 years from the date of collection of data is contrary to the principles of data minimization and storage limitation laid down in the Puttaswamy and Aadhaar judgment.

The main opposition to the Bill is the concern about the misuse of the legislation by police and prison authorities. The information gathered in the name of the nation’s safety is an attempt to breach the elementary rights of the citizens assured by the Constitution of India.

The Criminal Procedure (Identification) Bill, 2022, repeals the legislation enacted by the British in 1920 has fewer safeguards than the colonial law. The proposed measure in the Bill lacks safeguards on the issue of the data collected and appropriately protected. It could lead to a violation of the privacy of a person who is not even been convicted. As such, there are not sufficient safeguards in the Act.

Even more alarming is the increase in the state’s power by facilitating invasive biometric measurements for all arrested, convicted, and detained persons, regardless of the gravity of the offense.

Another concern is that this Act is widening the powers of the police and jail officers. Under the new legislation, ‘measurements’ may be taken by the police to gather samples not solely from convicts but also those arrested and even detained under any preventive detention legislation.

This may be expanded to all persons who are placed under arrest in any case. This is worrisome indeed because it is a blatant curtailment of fundamental rights.

The new Act can be applied to petty crimes such as violating a prohibitory order for not wearing a mask or a traffic violation, even peaceful Satyagraha.

A more worrying feature of the Bill is that a person, who has never been arrested in connection with an ongoing investigation, can be ordered by a magistrate to collect the samples of ‘measurements.’

If taken to its logical conclusion, the Criminal Procedure (Identification) Act, 2022 is an attempt to create a comprehensive profile of all the citizens in this country. And that amounts to making the fundamental rights redundant.

The ramifications of the Criminal Procedure (Identification) Act of 2022 are pretty lethal to the country. Unless the Supreme Court becomes alive to the impending danger posed by this Act to the country, the writing on the wall is clear; India has become a police state.

The author is a journalist based in Chennai.