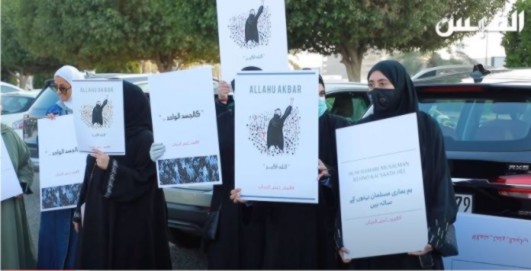 A B MASOUD 0 March, 2022 12:53 pm
Islamic Coin Claims it Will Scale Like Bitcoin and Hit $1 Trillion in Value
OIC Affirms the Status of the City of Al-Quds and its Holy Sites
American Muslims Gave an Estimated $1.8 Billion in Zakat: Study

The hijab row in the southern Indian state of Karnataka has triggered intense anti-India sentiments in the Arab world. A protest was also staged in front of the Indian embassy in Kuwait for the first time. Scores of Muslim women staged an in Kuwait City in connection with harassment of female students for wearing hijab in some Indian states, especially Karnataka.

However, Arab social media is rife with anti-India sentiments. However, this time was more intense than previous mob lynching incidents and attacks on mosques and cemeteries. Given the absence of personal liberty in Arab countries, the outpouring of anti-India sentiment on social media platforms shows that Arab governments want to voice their dissatisfaction with developments in India, which might have far-reaching consequences for the Indo-Arab age-old relationship.

As a result, Arabs, particularly those from the oil-rich Gulf countries, have been calling for a boycott of Indian products on Twitter and other social media platforms for about a year. They use the logos of Indian businesses that sell their wares in the Gulf, and they plan to use it to put pressure on India to abandon policies that they consider “anti-Muslim.” The interesting aspect is that certain countries want to take advantage of exporting more from these Arab countries, thereby removing India from the market.

This is the first time I’ve seen Arab social media influencers openly waging anti-India campaigns and urging people to help India’s “250 million” Muslims, according to Faizul Haq, a senior journalist who has worked in the Arab media and maintains a close eye on events in the region. Many writers and social media activists have claimed that India’s saffron brigade despises all things associated with Islam, according to Faizul Haq, who spoke with Islamic Voice. The majority of Arab women wear the hijab, which is an integral part of their culture. He went on to say that the anti-Hijab movement in India offends their culture and faith.

Anti-Islamic hostility is said to be on the rise in India. Because they believe that Indians come here to work in their country but disdain their faith and culture, which is also practiced by a religious minority in India, these attitudes have developed into hatred towards Indians.

As a result, Arabs, notably those from the oil-rich Gulf countries, have been using a hashtag on Twitter and other social media platforms to call for a boycott of Indian products for almost a year. They use the logos of Indian enterprises that sell their products in the Gulf market. They aim to use it as a means of putting pressure on India to stop pursuing policies that they consider to be “anti-Muslim.” The interesting element is that some countries want to take advantage of the potential to export more from these Arab countries, thereby displacing India from the market.

The demand for the expulsion of Indians from the majority group from the Gulf to pressure India not to harm Indian Muslims is a new component of this social media campaign. Because employment is a key issue among Arabs, there is the likelihood that this campaign will gain traction. They would want to replace Indians in as many jobs as possible to ensure their employment. In the Gulf countries, Indians make up the largest expatriate group. Other countries, likewise, would like to send their personnel to the Gulf.

AUTHOR: A B MASOUD