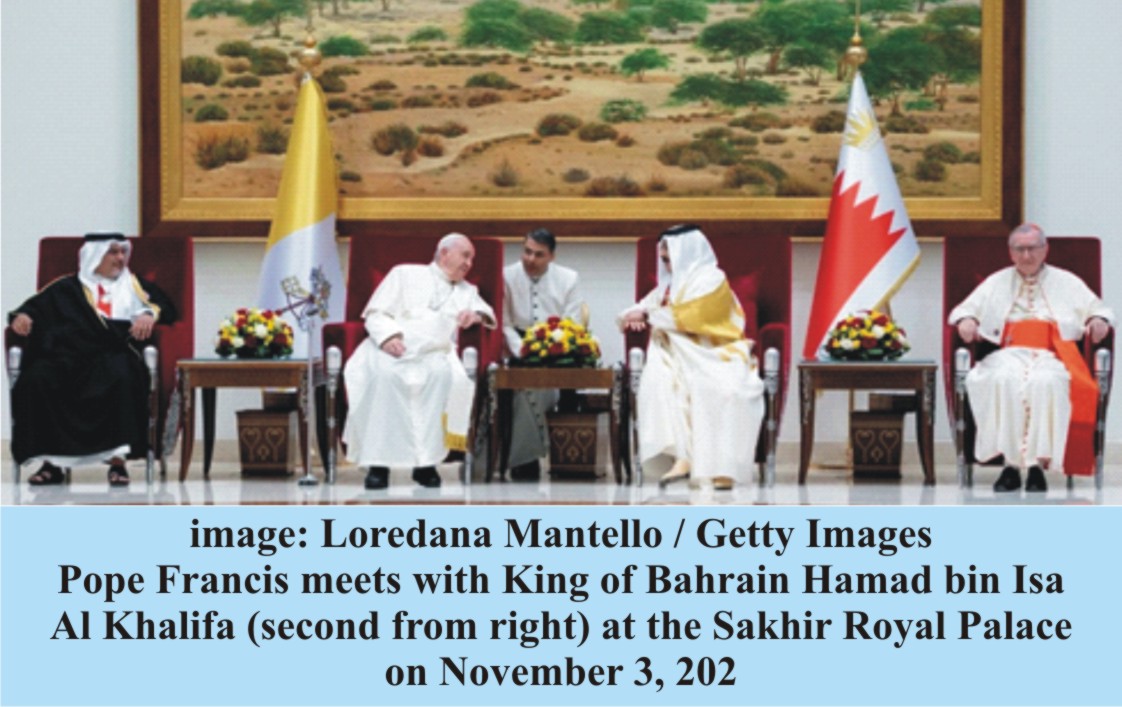 Pope Francis in Bahrain: A Royal Reminder of Religious ‘Freedom of Choice’

After greeting Pope Francis last week with a red carpet, a 21-gun salute, and a contingent of horses to accompany his humble vehicle, King Hamad bin Isa Al Khalifa highlighted one document to characterize his realm:

“[Bahrain is] a cradle of mutual coexistence between followers of different faiths,” he said, “where everyone enjoys, under our protection after that of God Almighty, the freedom to perform their rituals and establish their places of worship, in an atmosphere of familiarity, harmony, and mutual understanding.”

With Bahraini flags flying side by side with the Vatican banner, Francis was profuse in his praise. Enduring severe knee pain, he noted the country’s centuries-old “Tree of Life,” a 32-foot acacia that somehow survives in the Arabian desert.

Bahrain honors its roots.
“One thing stands out in the history of this land: It has always been a place of encounter between different peoples,” said Francis. “This is in fact the life-giving water from which, today too, Bahrain’s roots continue to be nourished.”

In the island nation the size of New York City, flanked on either side by Iran and Saudi Arabia, from November 3–6 the pope visited its 160,000 Catholic migrants primarily from the Philippines and India living among a population of 1.5 million, evenly divided between foreign workers and citizens.

From 111 nationalities, 30,000 gathered at the national stadium for Mass.

Bahrain is a Sunni Muslim monarchy ruling over a narrow majority of Shiites. Christians comprise 10–14 percent of the population, with up to 1,000 Christian citizens originally from Iraq, Palestine, and Jordan who were present at the time of independence. Alongside a 200-year-old Hindu temple, a renovated synagogue hosts prayer for Bahrain’s few dozen Jewish citizens.

But beside pastoral responsibilities, Francis came prepared to preach.

Francis’ visit was the 39th foreign trip of his papacy, in which dialogue with the Muslim world has been a prominent feature. Two months earlier he was in Kazakhstan, and Bahrain represented the 13th Muslim-majority location in his travelogue.

In 2019 in the United Arab Emirates, he cosponsored the Document on Human Fraternity for World Peace and Living Together with Egypt’s Ahmed al-Tayyeb, Grand Imam of al-Azhar, the foremost center of learning in the Sunni Muslim world.

Francis referenced the document at the forum, and Tayyeb concurred.

“The Quran establishes … that man was created free and able to choose belief, religion, ideology, and doctrine,” he said. “It follows that they must be free to choose any faith.”

This is not yet true in many nations in the Islamic world.

“Let us be guided by the saying of Imam Ali,” Francis said, quoting from the Shiite hero: “’People are of two types: they are either brothers and sisters in religion or fellow men and women in humanity.’”