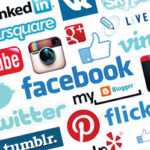 The Internet has been the biggest game-changer in the common man’s life around the turn of the century. In the age of mass media, a common individual was merely at the receiving end of the message. But in the age of social media, he is not only the recipient, but is also the purveyor of news, information, voice and vision etc. He is not alone being fed, but is also feeding. He is not a consumer only, but is a producer and publisher too.
Perhaps no technology altered the world so drastically as the Internet and the social media inasmuch as it is being labeled as the final brick of the civilization pyramid. However, one need not be judgmental on this score as human ingenuity may throw up many more surprises.
Interaction is the basic human need. What the village Chaupal and nukkad meetings did in the ancient and medieval India, bars and coffee houses were doing in the West. Today the same functions have been taken over by the social media. One networks through Facebook and Linkedin, shares contents on You Tube, Flickr, communicates through skype and Yahoo Messenger, collaborates through Google Drive and Asana, discusses through Google Groups, BeatTheGMA, shares knowledge on Quora and Wikipedia, shares locations on FourSquare and Mogostreets, interacts on Whatsapp, publishes on Blogger and Twitter, shares music through Soundcloud, engages in gaming on Zynga and holds events on MeetUP.
There are 180 million Internet users in Urban India. Of these, two-thirds or 66% regularly use various social media platforms. Most people maintain their virtual profiles and post and share updates or react to posts from acquaintances. According to Internet and Mobile Association of India (IAMAI), college students are the largest group who are active on the social media. Next come, non-working women who make up 11% while working women’s share is 7%.

Expansion of social media in India is happening at a rapid pace. Some interesting statistics:
India now has 462 million active internet users (out of a global total of 3.63 billion).
Internet usage is growing in India at a rate of 90% while the global average is just 19%.
India’s web users have 153 million active social media accounts (from a global tally of 2.43 billion)
India has 1.01 billion mobile connections.
India has 153 million social media users, of which 130 million are on mobile
India’s active social media users are up by 23% since March 2015, compared to 26% global rise
Mobile subscriptions in India grew only by 7% in 2015.
Japan tops the world with 93% people having reach to the Internet. China ranks next with 52% people having a reach to the Internet. India comes a little behind with 39%, Pakistan 18%, Indonesia and Bangladesh figuring behind India but above Pakistan.

Digital Advertising Growing
In 2016, Social Media Advertising segment amounted to $ 214 million in India.
It is expected to show an annual growth rate of 14% resulting in a market volume of $413 million in 2021.
The average revenue per Internet user currents amounts to Rs. 34 annually.
Three-quarters of retailers in India plan to increase investment in social media promotions and advertising, according to a May 2016 survey from the Retailers Association of India (RAI) and Octane Research.

Building Communities
Social media helps build communities of likeminded people and professionals and mobilizes their energy towards achieving their social goals. But unless the discussion is on rational lines with ample fairness in the dialogue, it might even lead to ghettoisation of minds and fossilization of sectarian mindset.
Social media is a catalyst for change and vehicle for business. It helps build brands, provides access to individual customers, allows grievances to be heard by producers in time and without any cost and allows promotion of products and showcasing of success and more.
However, there are also risks and disadvantages. It creates addiction and promotes distraction. It may lead to waste of time and may even promote the tendency of depending upon virtual friends, but negligence towards the immediate family. Particularly youth tend to waste considerable time on petty issues which may distract them from pursuing serious issues.
Experts says while social media promotes easy chair protest, slackens participative spirit as it has minimal or no motivation.
Social media can become a tool in the hands of fascist forces for propaganda, fake and fabricated information, character assassination, disfigured photographs and brainwashing. Several such groups have set up social media units to spread misinformation and mobilize support for communal forces. They are paid by political parties for every post they insert into the popular media platforms. It is therefore not a very credible source of information. Similarly, several activists push the same or similar posts on this platforms making it a repetitive medium.

February 3, 2018
The richest 1% in India cornered 73% of the wealth generated in the country last year, reveals the same Oxfam survey whi... More
Prev Post Best Wishes to Islamic Voice on Completing 30 Years
Next Post Messenger of Peace - Peace and Justice Go Together