Peace activist and social worker Feroze Abdulla’s annual harmony dinner completed three decades this year with the Eid Milan being organized on August 22. It was attended by nearly 2,500 guests, mainly from non-Muslim communities. Dozens of people from North
Eastern states also attended  the function while IG and DG of Police, Lalrokhuma Pichau, an officer from the North East, issued a stirring call for harmony. Mr. Feroze and his family have been organizing the Eid Milan and Harmony Dinner immediately following
the Eidul Fitr at the wellilluminated Samad House since 1981. For the last two decades, Rainbow Forum has been collaborating in the effort with the family. It draws a diverse range of social activists, politicians, leaders from various spheres of life of the city, artists, faith leaders and NGO workers. Speaking at the occasion, Karnataka Governor H. R. Bhardwaj said India’s social fabric was strong enough to withstand the threat of communal division by Youtube images or SMSes. The Governor told the multi-religious gathering that he had taken up the question of exodus of people from the North Eastern states with the Prime Minister and Home Minister and wanted the State Police to be more vigilant against rumour and mischief mongers. Mr. Bhardwaj said though the State Government machinery acted instantaneously, there was intelligence failure. How could some SMSes or odd calls and morphed images of violence
create such scare among people working in Bangalore, he questioned. The Governor said it was the responsibility of the government to provide protection to all people including minorities and people from other states and  everyone had the right to reside and work anywhere in the country. Highlighting Islam’s contribution to the country, Bhardwaj said people who accused Muslims to be
‘Babur ki aulad’ have seen their rejection at the hands of the secular Indians. He said India was dotted with Muslim monuments,
hospices, monasteries, and mosques and no one can  delete these sentinels of the past. He said Hindus, Muslims, Christians, Sikhs,
Parsis and followers of other faiths constitute the warps and wefts of the nation’s social fabric. He highlighted Maulana Abul
Kalam Azad’s contribution to the freedom struggle and said the triumvirate of Nehru, Gandhi and Azad were responsible for raising
the foundation of secularism even while cherishing their own personal faiths. 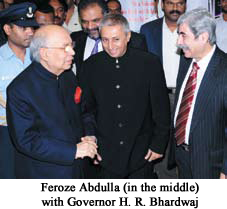 Speaking to Islamic Voice, Mr. Feroze said the Harmony Dinner is an initiative to bring together people from diverse faiths and spheres of life on a platform once in a year in order to tap the common goodwill for building social harmony. On the dais this time were Bangalore police commissioner Jyothi Prakash Mirji, local Sikh community leader Mr. Doddhi, Art of Living representative Mr. Govind, Parsi community leader Mr. Vakil, Dr. Taha Matheen of Jamaat e Islami, N. A. Harris MLA, former BJP government Minister Dr. Mumtaz Ali Khan, Marwari community leader Rajesh, BJP MLA Katta Subramania Naidu, local Church leaders, Maqbool Ahmed, President of the Central Muslim Association and social activist Mr. Shafi Ahmed. Nearly a hundred police officers also attended the Eid Milan and the dinner. Mr. B. G. Koshy, secretary of the Rainbow Forum conducted the proceedings. The peace efforts by Mr. Feroze
Abdulla in collaboration with Rainbow Forum have yielded rich peace dividends for the citizens of Bangalore. The city has witnessed no communal incident for the last two decades and communally explosive issues are resolved at the spur of the moment. Nearly ten years ago the Eidul Azha and Mahaveer Jayanthi coincided on the same dates. A series of meetings between Muslims and the Jain
community with the mediation of police brought about a solution in a way that each community observed its rituals without hurting other’s sentiments.