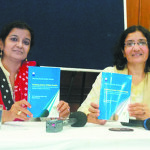 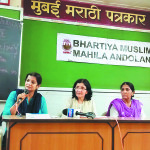 By M Reyaz, (TwoCircles.net)
New Delhi: “Constitutional rights to religious freedom is equal for man and woman and it is the failure of our secular democracy if women do not get their rights,” said Zakia Soman of Bharatiya Muslim Mahila Andolan (BMMA), while interacting with the Press, during the release of their new study ‘Seeking Justice Within Family: A National Study on Muslim Women’s Views on Reforms in Muslim Personal Law’.
She said that it’s high time we should accept that there are problems in our society and that women are often made to suffer, adding that paying lip-service that Islam gave rights to women 1400 years ago won’t solve the problems of women and would not solve the problems.
Soman, however, made it clear that BMMA is not supporting or asking for a Uniform Civil Code, but wants Muslim women to have their rights with the ambit of the constitutionally mandated Personal Laws.
BMMA has been demanding the codification of Muslim Personal Laws in accordance with Sharia and have been campaigning against polygamy, triple talaq and wants marriage to be fixed, above 18 for girls age and above 21 for boys.
The report, co-authored by Dr Noorjehan Safia Niaz and Zakia Soman, was released on August 20 at Delhi’s Press Club.
Noorjehan pointed out that it’s strange that every time Muslim women demand their rights they are asked about UCC, interestingly by those groups of men who would otherwise not give their own women much rights. As part of the study, conducted by BMMA across 10 states of Maharashtra, Gujarat, West Bengal, Karnataka, Bihar, Tamilnadu, Madhya Pradesh, Rajasthan, Jharkhand and Odisha, 4710 Muslim women were directly surveyed.
The Study ascertained the status of Muslim women pertaining to matters such as marriage, divorce, maintenance, custody of children etc. and also tries to find out their views on legal provisions concerning these aspects.
A detailed questionnaire was prepared and administered to 4710 Muslim women above 18 years of age across the 10 states. An overwhelming number of women surveyed were from weak economic background.
The answers by women to key questions are quite revealing. It suggests that Muslim women are aware of their legal rights and are determined to attain justice in family matters. An overwhelming number of women demand reforms in Muslim personal law as is prevalent in India today. They want an elaborate codified law based on the Quranic justice framework to cover matters such as age of marriage, divorce procedures, polygamy, maintenance and custody of children etc.
Some Findings”
An overwhelming 73% of women surveyed are from poor background with family incomes below Rs. 50,000 annually
47% women surveyed have 1 or 2 children
55% or over half of the women surveyed were married before the age of 18 years. However, 10.6% women married when they were above 21 years
Overwhelming 82% women have no property in their name and 78% are home makers indicating absence of income.
Over 47% women don’t possess their own nikahnama.
Other important findings pertaining to family law:

Dispute resolution mechanism:
53.2% women reported having faced domestic violence at some point in their lives. Most women said they go to family courts followed by police and then by social organizations or NGOs to complain about their domestic issues. Only 1.4% women reported having gone to a Qazi or Darul Qaza. An overwhelming 95.5% women have not heard about the AIMPLB “ All India Muslim Personal Law Board.

Age: While 75% of respondents wanted age of marriage to be above 18 years, 88% wanted boys to marry above the age of 21.

Mehr: More than 40% women have received less than Rs. 1000 as mehr.
44% women have not received the mehr at all.
Most respondents were not aware of the empowering provisions about mehr and that it is their right to decide the amount.
83.9% of respondents want the annual income of the husband to be her minimum mehr amount.

Polygamy: An overwhelming 91.7% or 4320 women have spoken out against polygamy saying that a Muslim man should not be allowed to have another wife during the subsistence of the first marriage.

Divorce: Of the 525 divorced women, 65.9% were divorced orally and 78% women were divorced unilaterally. The Study indicates that an overwhelming 88.3% or 4159 women want the legal divorce method to be the talaq-e-ahsan method spread over a period of 90 days and involving negotiation and avoiding arbitrariness.

Maintenance: 50% women receive maintenance from the husband during the marriage but 27% reported receiving none. Almost half of the divorced women were either being supported by their own parents or were supporting themselves by working as they did not receive maintenance from husband.
Codification of family law: An overwhelming 83.3% women feel that their family disputes can be resolved if the law is codified.
89% want the government to intervene in helping codify the Muslim personal law.
Over 86% women want religious leaders to take responsibility for enabling Muslim women to get justice in family and they want these leaders to support the bringing about of a gender-just law. Overwhelming 86% want the community based legal dispute resolution mechanism to continue but want the functionaries to be made accountable to law and to principles of justice. They want the government to help ensure this accountability through a legal mechanism.
90% women want qazis to be brought under legal accountability mechanisms.
Bharatiya Muslim Mahila Aandolan (BMMA), is an autonomous, secular, rights-based mass organization led by Muslim women which fights for the citizenship rights of the Muslims in India. Formed in January, 2007, BMMA works towards highlighting the voices of Muslim women on their important concerns and have been demanding reforms in Muslim family law as women. BMMA now plans to reach out to all the stakeholders, including the Ministries of Women and Child Welfare, Minority Affairs, Human Resource and Development, National Commission for Women, national Commission for Human Rights, etc.