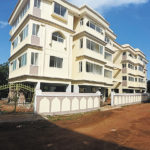 Vasco (Goa): The building of the Aashiyana, a home for the children was inaugurated at Zuarinagar, 30 kilometres from Panjim on May 8. Set up by Madhur Sandesh Centre of the Jamate Islami Goa, the home can take 100 inmates. Currently it has 36 girl children. The complex has two buildings, one for a school and another a hostel.
The complex was raised on a 900 sq. metre plot and has a built-up space of 1360 sq. metres. It is staffed by 12 persons who include two wardens, two matrons, one cook and an assistant cook.
The complex was inaugurated on May 8 by Mr. T. Arif Ali, vice president of the Jamate Islami Hindi.
Aashiyana coordinator Abdur Rahman Khan informed Islamic Voice that the Home had become a necessity as uncared children from the Muslim families were being adopted and raised in Christian institutions and were ultimately converted to Christianity. The brochure of the Aashiyana says around 3,000 such children are still being reared and educated at various Christian homes in Goa, a tiny state in itself. It is estimated that 50 per cent of the Faith Residential Schools in the state are from Muslim families. The Aashiyana Shelter Home was inaugurated in 2010 as a pilot project and could have its own buildings six years later. When the parents approached these residential schools to withdraw their children, they were refused school leaving certificates and were asked to cough up all the expenditure incurred on their accommodation, board and education in the past years. As a policy, the Aashiyana gives preference to such children who are from single parent families and are vulnerable to admissions in faith residential schools.
A home schooling module was started in 2012 which has now taken shape of a permanent school with official permission to start first and second standard classes and promise of upgradation year after year. So far, 61 children withdrawn from FRS have benefitted from the Aashiyana.
For more details, contact: Mr. Abdur Rahman Khan, Coordinator, Madhur Sandesh Centre, 301, F. X. Towers, Opp. MPT Hall, Vasco da Gama “ Goa. Ph: 94229-70688, 94223-88688 Email: [email protected]