Mumbai: For Muslims in Malad, June 3 evening was not a routine affair. For the first time, instead of heading to a nearby mosque to break their Ramzan fast, they had another destination: Our Lady of Lourdes Church in Orlem that had organised an iftar. The church even called out azaan and made arrangements for the devotees to pray namaaz and break their fast. “We normally have this for school children, but this time, I thought we should do it for everyone. So we called for an iftar gathering that was open to other faiths as well. We are all Indians and live and love Indian culture so we prayed for our country. People of all faiths were called for the iftar because we believe in Sabka Malik Ek,” said Fr. Michael Pinto, the parish priest.Over 150 people attended the event that even welcomed men, women and children from communities besides Muslims and Christians. Some of the delighted Muslims in the area expressed their joy at the courtesy extended to them. “Fruits and dates were cut and served like they are done in any iftar party. They had even made arrangement for a person to given azaan for their prayers. They gave us a lot of respect and we really appreciated that they called us because we live in the same area,” said RuksarNadiadwala, a resident of Orlem.
(Extracted from mattersindia.com) 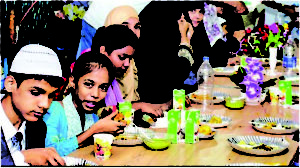