The AIMPLB has demanded a minimum compensation of Rs.25 lakhs to be paid to Muslim youngsters tagged as terrorists, who were released by courts of law in the absence of any evidence found against them. 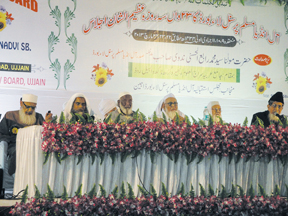 Ujjain: The 23rd conference of the All India Muslim Personal Law Board (AIMPLB) has called upon the Government of India and the state governments to take initiatives for redressing the grievances of Indian Muslims, of interference in their Islamic family laws known as Muslim Personal Laws or Shariah.
“The Personal Laws of Muslims are the integral part of their religion and belief and any tampering with these laws is interference in the religion. It is clear violation of fundamental rights to profess, practise and propagate their religion which is guaranteed in the Indian Constitution. It is our constitutional right to live in the country with full freedom of religion”, the AIMPLB said. The three-day AIMPLB conference concluded here last fortnight, at Jamia Arabia Siraj-ul-Uloom, the venue of the convention, on the outskirts of the historic city of Ujjain in Madhya Pradesh, while adopting a seven point resolution by voice vote. The AIMPLB has demanded a minimum compensation of Rs.25 lakhs to be paid to Muslim youngsters tagged as terrorists, who after being incarcerated in jails were allegedly tortured physically and mentally at the hands of security agencies, were then released by courts of law in the absence of any evidence found against them. It also demanded that many other Muslim youngsters who are languishing in prisons in different states for many years without any charge-sheet filed against them and without any incriminating evidence against them, must be released immediately. Advocate Abdur Rahim Qureshi, assistant general secretary and spokesman of AIMPLB, said: “It is necessary that every group and community should feel that those things which are dearer to their lives are safe, preserved and protected. The first and foremost thing in this regard is religion. As far as Muslims are concerned, they feel and there is reason for this feeling that there is interference from the state and its organs in the matter of religion”, he added.
The AIMPLB was very critical of the Direct Taxes Code Bill as it is harmful to the places of worship and religious Trusts of all religious communities including Muslims. The Board has demanded that the exemptions and concessions as provided in the present Income Tax Act should be incorporated in the Direct Tax Code Bill. The Board called upon Hindus, Sikhs, Christians and Parsees to stand up against the Direct Tax Code Bill and support and raise their voice with the AIMPLB to amend it. The Direct Taxes Code is a bid by the government to impose tax on mosques, temples, churches and gurdwaras, charitable trusts or organisations which are working for any religious community. Meanwhile, the “Ujjain Declaration” was released at the concluding session of the conference, where among other things, it said that in the present era, the safety of women against sexual assault has become a top priority for which, only the legal sword and enhancement of punishment against the perpetrators of these crimes are being demanded. However, no effort is being made to change the mindset of the men by inculcating moral values in them.
(twocircles.net)