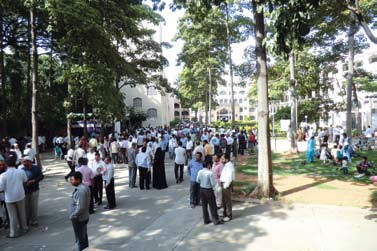 Congress MP Rahman Khan’s group will take over the reins of administration of the Amanath Cooperative Bank  for the next five years. All the eleven candidates of a syndicate put up by him registered a landslide victory in the elections held on Sunday, September
23. The high and the mighty among the Muslim elite of Bangalore, several among whom  have cases pending against them in the court for defaulting on the loans extended by the same bank, supported the group. None of the candidates put up by the rival syndicate led by Dr. Mumtaz Ahmed Khan could make it to the winning post.  In the brazen show of power, the machinery of the Congress
Party”at least the Muslim side of it”worked for the  success of the group. Posters seeking support for the group had pictures of former Union ministers Jaffer Sharief and C. M. Ibrahim, Congress MLAs Qamarul Islam and N. A. Harris, builders Ziaulla Sheriff and Irfan
Razack, several Muslim MLAs of Karnataka Assembly and several simply rich, though not essentially influential Muslims. Several Congress corporators of the BBMP and Amanath Bank staff too were seen canvassing support for the group. Amanath Cooperative
Bank was taken over by the government in 2007 following several irregularities of the scam proportions. The bank functioned under Government appointed administrators and the CEOs and had to massively cut down on its services. The general manager of the bank was arrested and passed several months in jail. The Bank did not have much success in recovering the loans from the list of defaulters
that read like a who’s who of Bangalore Muslims. It seems the levers of power jammed the wheels of justice in these cases. Proceeding of the cases in the lower courts were stayed by the High Court. In an advertisement issued by the corporate office of
the Bank in The Times of India, Bangalore dt. November 24, 2009 by the then Administrator Syed Zameer Pasha (IAS) and
the then CEO Shahar Bano, the  amount for the defaulted loans ran into several crores. Name of Mr. K. Rahman khan though topped the list, others included Messrs. Ziaulla Sheriff, S. S. Peeran, Aziz Mohammed, Ateeq  Ahmed, Hyder Ali Jeevabhai, M/s. PHR Developers (Irfan Razack) figured among others. Curiously, some of them have either been elected for the new Board of Directors or were among the prominent backers as would the massive advertisement campaign in Daily Salar suggested. In a message following the election, the new board of directors has thanked the voters for having enabled them to fulfill their ambitions by electing them and have vowed to restore the old credibility to the bank. The voting for the directors’ election was held in Al- Ameen College campus and was entirely peaceful. Of the over 39,000 share-holders, only 2,675 cast their votes. Among the new directors are businessman Azeez Mohammed, garment manufacturer and Congress MLC Naseer Ahmed, businessman C. M. Aleemullah Khan, Asif Nooruddin (brother of Belgaum MLA ), leading beedi manufacturer M. Riyaz Ahmed, chartered accountant Hyderali Jeevabhoy, social workers Rahmatullah Khan, A. M. Shariff, Nisar Pasha, Ms. Qurratul Ain Shabana and Ms. Chhaya K. Several names among the new directors are common with the list of defaulters produced by the abovementioned advertisement. In a chat with this scribe even while the voting was on, Dr. Mumtaz Ahmed Khan, founder of the Al-Ameen Educational Society, said it seems majority of the voters were fence-sitters  and have decided to jump on the side of the powerful. Among the prominent losers was Mr. Syed Zameer Pasha, IAS retired who could gather just around 700 votes, the maximum among the candidates put up by the rival side. It is to be seen if the new board initiates measures to compel the old defaulters to cough up the much delayed loan arrears. This would be the main criterion for the credibility of the new board of directors. The bank was set up in 1977 by Mr. Rahman Khan and Dr. Mumtaz Ahmed Khan and was first among the ooperative banks in Karnataka to be elevated to the status of scheduled bank. The duo worked really hard to build up the credibility of the bank with ultramodern facilities and making it convenient to simple Deccani Urdu-speaking businessman or Burqa-clad women to run their transactions. At its silver jubilee in 2002, its deposits stood around Rs. 500 crore. However, as news of the huge defaulting on loans led to a run on the bank in 2007, several account holders withdrew their deposits. In 2009 the deposits stood at Rs. 332 crore, (as per the statement of the then CEO Shahar Bano), a pale shadow of its former self. In a city like Bangalore the Bank has immense potential to grow and expand. If the new Board of Director, among whom are several sincere social workers and successful businessmen, could inject life into it, the bank can regain its lost credibility. It all depends on the new directors acting independently and refusing back-seat driving by their backers.