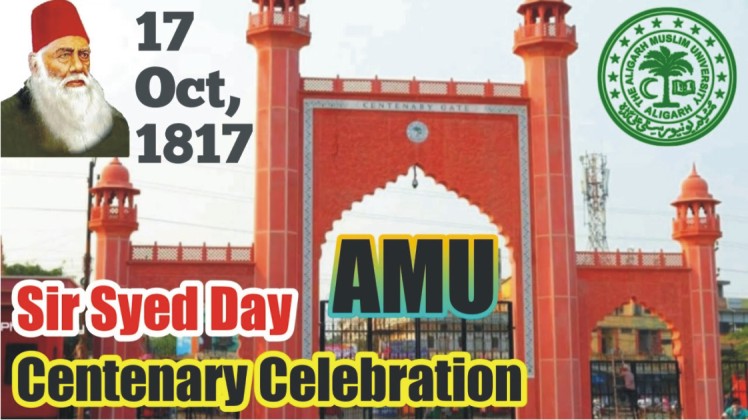 Aligarh: “Sir Syed was a great champion of Hindu Muslim unity, and his ideas of secularism and inclusiveness are reflective in the way AMU works and operates,” said former Chief Justice of India Tirath Singh Thakur. He delivered the commemoration address on Sir Syed Day celebration on October 17 as the Chief Guest of Aligarh Muslim University (AMU).

Former CJI emphasized that AMU brings positive stories of diversity and inclusion to the forefront to make this world a better place. The Prime Minister, Narendra Modi, called AMU a ‘Mini India.’

Some of the very rare and old translations of Ramayan, Geeta, and other scriptures are preserved at AMU, and the university attracts students from all religious communities from across the country and the world”, said the Chief Guest.

He added: “Sir Syed thought that the modern education was the cure for all ills and aptly described ignorance as to the mother of all trials and tribulations. To bring reform, he set up the Scientific Society in 1864, launched the Aligarh Gazette in 1866, started the Tehzibul Akhlaq in 1870, and finally established the MAO College in1877 which later became the Aligarh Muslim University”.

Remarkably few people in history have triumphed in driving out blind orthodoxy of people making them embrace enlightened thoughts and attitudes. Like Sir Syed Ahmad Khan and to pay homage to the great Aligarh Muslim University (AMU) founder and his life-long journey, dignitaries, university community members from across the globe, faculty members, and students joined the online Sir Syed Day celebrations.

Students should be passionate, believe in their vision, dream big by acquiring knowledge and execute their plans by making extra efforts on their goals, Prince Dr. Qaidjoher

In the welcome address, AMU Vice-Chancellor, Professor Tariq Mansoor, said: “It will be difficult, to sum up, Sir Syed, a multi-faceted personality whose work changed the course of history during the second half of the 19th century. Several upheavals marked the era. The mutiny was foiled, medieval feudal order had collapsed, and the economic system was in shambles. Amidst this, Sir Syed, a man of extraordinary talent, comprehensive knowledge, clear vision, and farsightedness steered the countrymen”.

“Sir Syed founded the Scientific Society and started the periodicals, the Aligarh Gazette and Tehzibul Akhlaq to nurture a scientific attitude and secular approach. The writings in these periodicals shattered several misconceptions, superstitions, and the prejudice that had cornered people’s minds. In the current scenario, Sir Syed’s pragmatic vision, a spirit of renaissance and a new orientation towards understanding the religion are the need of the hour”, said Prof Mansoor.

“It means much to me that you have read, understood, and valued my work. That the award bears the name of Sir Syed Ahmed Khan only adds to the honour. I have long admired Sir Syed for his leadership, courage, and determination”, he pointed out.

Explaining his work as a historian, Prof Robinson said,”I have studied in the context of UP Muslims: the emergence of Muslim politics; the widespread adoption of print from the nineteenth century and its major impact on religion and politics; aspects of religious change, among them the emergence of forms of ‘protestant’ Islam; religious change and the development of forms of modernity, for instance, individualism; and the world of the Ulama”.

Thanking the Vice-Chancellor for the award, Prof Robinson said that the work it recognizes is in part mine and that of UP Muslims, many associated with AMU.

Speaking on occasion, Prof Narang said, “Sir Syed’s life was an open book.He kept the doors of MAO College open for people of all religions.Andalways said that Hindus and Muslims have borrowed and adopted culture from each other”.

He added that Sir Syed famously said, ‘India is a beautiful bride and Hindus and Muslims are her two eyes. If one of them is lost, this beautiful bride will become ugly’.

University paid floral tribute at the Mazaar (grave) of Sir Syed following the traditional ritual of ‘Chadar Poshi’. An online ‘Exhibition of Books and Photographs’ of Sir Syed Ahmad Khan at the Sir Syed House was jointly organized by Maulana Azad Library and Sir Syed Academy.