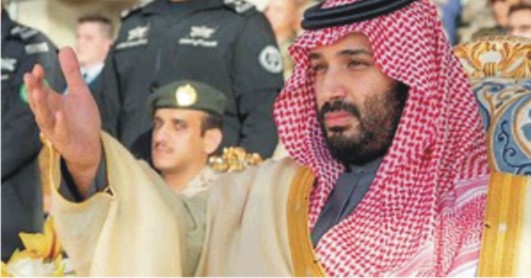 AMU moots proposal to confer the degree on Saudi Prince

The Aligarh Muslim University proposal was made in view of the exemplary services and contribution to the global affairs of Saudi Crown Prince Mohammed bin Salman.

The Aligarh Muslim University (AMU) has sent a proposal to the Ministry of Foreign Affairs to confer an honorary Doctor of Letters D. Litt degree on the Crown Prince of Saudi Arabia, Mohammad bin Salman, popularly called MBS

The letter written by AMU Registrar Abdul Hamid said that in view of the exemplary services and contribution to the global affairs of His Royal Highness Mohammed bin Salman, Crown Prince, Kingdom of Saudi Arabia, the university proposed to confer D.Litt degree ( Honoris Causa) on His Royal Highness.

The proposal said the Prime Minister appreciated the role of the AMU in India’s outreach towards fostering better ties with the Islamic world.

Speaking to The Hindu, AMU Vice-Chancellor Mansoor said the D.Litt degree would “strengthen India’s historical and cultural, economic and educational links with Saudi Arabia.” The Prime Minister, Prof. Mansoor underlined, also wanted to strengthen the “geopolitical relationship with the Gulf countries.” “The move will augment his efforts.”

On whether the proposal had been mooted as a balm to heal the fissures that had emerged between India and the Gulf countries after BJP spokespersons’ controversial statements on Prophet Mohammad, Prof Mansoor said the proposal was first sent in September 2021, with a copy to the Ministry of Education. The Ministry of External Affairs, he said, sought a list of dignitaries that the university had awarded in the past.

He said that the AMU conferred the honorary D.Litt on King Saud bin Abdul Aziz, the grandfather of MBS, in 1955. “We have also conferred honorary degrees on Raza Shah Pehlavi, the Shah of Iran, in 1956, the President of Egypt Gamal Abdel Nasir (1960), among others.”

He said the university had a special relationship with the Gulf countries as a large number of alumni work in these countries.
AMU spokesperson Shafey Kidwai said the coordination would be through diplomatic channels by the Ministry of External Affairs and that the proposal was still under consideration.
On the questionable track record of MBS on freedom of speech, Prof. Kidwai said it was an internal matter of the country.