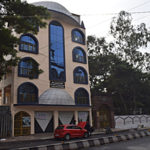 Bengaluru: A dialysis centre providing free dialysis to the underprivileged members of the society would be opened shortly in Bengaluru. The Bilal Masjid and Eidgah Management Committee would be commissioning its Al-Bilal Dialysis Centre on Bannerghatta Road just across the road from the mosque. The mosque management committee has constructed a five-floor building with 3,000 sq. ft. of space which will have a dialysis centre, a dormitory for attendants of the patients and a medical clinic as well as dispensary. Committee Secretary Mr. Mohammed Faiyaz informed Islamic Voice that the committee had entered into a tripartite agreement with National Health Mission of the Government of India, and the Government of Karnataka’s Department of Health to set up the Dialysis Centre where poor people (those holding BPL cards) would be provided free dialysis facility. The Centre is in the process of setting up 12 dialysis machines which have been procured. The Mission and the Government of Karnataka would bear the expenses of Rs. 1,100 on each patient for each turn of the process.
He said the top floor of the Centre is being set aside for accommodating the attendants of the patients who visit the nearby Jayadeva Institute of Cardiology, a Government run hospital for heart care. Since the hospital provides heart care to the poorest of the poor in the State, most attendants of the patients who travel with them from remote corners of the State face problems in finding accommodation in the city. The Centre’s dormitory would be able to provide stay and food facilities to 30 such attendants at a time. Besides this, the Centre would be running a clinic for treatment of outpatients for common ailments. Faiyaz said, the mosque committee will also be setting up a blood bank in near future.
The Bilal Masjid and Eidgah Management Committee which built a Turkish style mosque on the Bannerghatta Road in recent years, also runs an Urdu school and manages a graveyard. Contact, Ph: Md. Faiyaz 98868-43405.