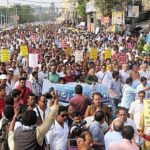 “Religious belief is personal, but nation is for all” “ proclaimed placards and posters as a large section of West Bengal’s civil society hit the streets alongside thousands of common people recently, decrying recent group clashes in the state and calling for preserving the age-old tradition of communal amity. Poets, educationists, film and theatre personalities, painters and eminent persons from other walks of life were the vanguard in the huge rally from the city hub Dharamtala to the cultural epicentre Rabindra Sadan complex. They condemned the recent violence witnessed in places like Raniganj, Asansol and Arsha over Ram Navami rallies which left three dead and five police personnel injured. “We are seeing religious excesses, and use of religion in politics on an unprecedented scale in Bengal. This is terrible. This is not our tradition. Our tradition is co-existence. We have taken out the rally to make people aware of this,” said theatre director-actor Meghna Bhattacharya.
(twocircles.net)