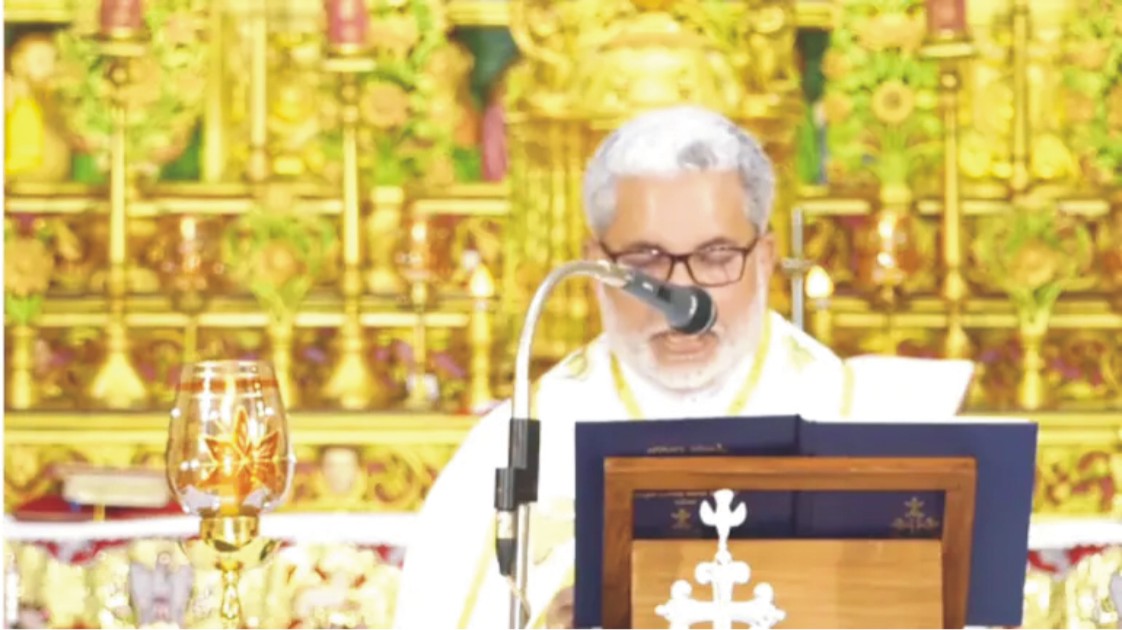 As expected, the Syro Malabar Church Pala diocese bishop Mar Joseph Kallarangatt did not get any takers from his community, even from the clergy ranks, for his remarks on Christian girls marrying with Muslim boys whom he dubs as ‘love and narcotic Jihad’.

He found himself completely isolated in the Christian circles and faced all-around condemnation in Kerala and outside.

Christian intelligentsia and clergy members described his statement as “unfortunate and playing into the hands of RSS and its offshoots who try to keep the bogey of ‘Love Jihad’ at center stage.

They asked bishop Mar Joseph to withdraw his statement that creates division among the two minority communities. Reacting to this, Rev. Dr. Dominic Emmanuel said,” May God enlightens us all against the evil designs of the RSS to divide the country on religious grounds.” Emmanuel highlighted that his niece was married to a Muslim and still goes to Church.

Two of my male first cousins married Muslim women, and both the women are now practicing Catholics. So, where is the issue of Jihad of any kind, he asked.

Talking to Islamic Voice, AC Michael, a former member of the Delhi Minorities Commission, who hails from Tamil Nadu, said that the Bishop’s statement is condemnable and should withdraw it.

“He has spoken for himself as an individual,” said Michael. “Yes, he is a bishop of a particular territory (at Kuravilangad in Kottayam district, Bishop of the Palai Diocese of the Syro-Malabar Catholic Church), but his views do not represent the views of Christian community.”

The fact of the matter is that this very Government led by Prime Minister Narendra Modi had informed the Lok Sabha by the Union Minister of State in the Ministry of Home Affairs, G Kishan Reddy, on 5 February 2019 that no case of “love jihad” reported in Kerala by any of the central agencies.

The term “Love Jihad” is frequently used by Hindutva organizations to allege a conspiracy by Muslim men to marry women from other religions solely to convert them to Islam. The term was invented in Kerala more than a decade ago. The Bishop of Kallarangatt implied that Muslim youth were now snaring Christian youth and making them drug addicts.

The Minister made it clear that “the term ‘love jihad’ is not defined under the extant laws” and “Article 25 of the Constitution provides for the freedom to profess, practice and propagate religion subject to public order, morality and health”. And that the “various courts have upheld this view including the Kerala High Court.”

Another activist, Fr Cedric Prakash SJ, described the bogey of ‘Love Jihad’ as an insidious strategy to defocus on real issues plaguing society in India. Recently, a Bishop from Kerala directly accused Muslims for making ‘Catholic’ girls in the State, victims of ‘love and narcotic jihad’; on 10 September the CM Rupani of Gujarat (who has since resigned for other reasons) said that his Government is “dealing strictly with those who trap Hindu girls and elope with them.” Both the Bishop and the BJP CM are wrong on several counts- and in fact, their words are patently unconstitutional. Their words are reflective of a patriarchal mindset, said Prakash.

Unfortunately, this is not the view of the Pala Bishop alone, said Sunny Jacob SJ.

Islamophobia is spreading like wildfire among the Syrian Catholic Church in Kerala, and the venerable bishops are adding fuel to the fire.

Veteran journalist John Dayal said the Indian Christian community is not a monolith. It reflects the scores of denominations and sects, and even cults, as some would say, in the country. To begin with, the Catholic group is three independent entities, united in their allegiance and affiliation to the Pope while maintaining their separate cultural and liturgical identities as the Syro Malabar Catholics, the Syro Malankara Catholics, and the Latin Catholics.

Dayal quoted an open letter of Rev Prakash which says,”the utterances of some Bishops demonstrate how easily one can fall into a meticulously planned trap of the Sangh Parivar that negates the right to freedom of religion. It also reinforces the attitude of the Church towards women.

While Stanley Kozhichira posed the question to the Syro Malabar church, why does it have no problem baptizing a non-Christian for the sake of a sacramental marriage? They often deny the marriage until the other party is baptized, while the Church has provision to solemnize inter-religious marriages. And we don’t call this LOVE JIHAD’, he asked.

Kerala has become a battleground for religious fundamentalists; the sad part is when bishops and priests propagate. The Sangh’s agenda of dividing Kerala- Christian and Muslim gap has been fuelled by some priests and bishops. Some might know the Sangh Agenda; others might be ignorant.

I used to say there was a time in Kerala when the Muslims had their Persian cuisines and dressing style, Christians had their own individual cuisines and dressing, and so did the Hindus. But we always shared these delicacies from the neighborhood. We shared a common identity as Keralites. But today, we have identical dressing styles and common cuisines, but the dividing gap is far broader, said Dayal.

Stunned by the protests, the Bishop’s staff sought to make amends, saying the remark had been taken out of context as the religious head was but cautioning drug menace ravaging in the state. The Kerala Catholic Bishops Conference repeated this explanation in the hope that the furor would die down. The Muslim Coordination Committee at Kottayam filed a petition demanding registering a non-bailable case for his remarks.