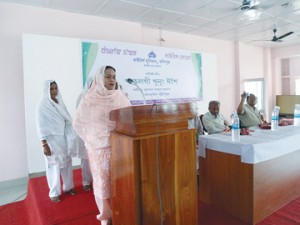 Imphal: The literary society of the Manipuri Muslims Writers’ Union, Manipur, released a book on folk-songs of Manipuri Muslims at a function organised at Agriculture Department Training Hall, Sanjenthong, in Imphal on June 23, 2013. The function was graced by renowned musicologist of the State, Laishram Birendrakumar Singh as chief guest and professor of Manipuri Department, Manipur University, Dr. Oinam Ibochouba Singh as special guest. President of Muslim Writers’ Union Mohd. Abdur Rahman presided over the function. The book titled “Pangalgi Khunung Eshei” is a collection of folk-songs sung by Manipuri Muslims in the past.
(Reported by Dr. Syed Ahmed, TwoCircles.net)