The population of unproductive cattle is set to double in two years placing a burden on farmers or threatening crops and forests. 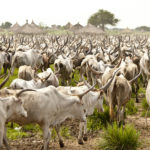 India has 190.9 million cattle (cows and bullocks) according to the 19th Livestock Census. The number was 199.1 million in the past Census conducted between 2007-12. The growth rate is negative 4.1%. India has 14.5% of the world’s cattle population.
According to the Annual report of the Department of Animal Husbandry, Dairying and Fisheries, cattle produce some 80 million calves, of which about 55 million (27.5 million are males and an equal number of females.
About a tenth of males calves are inducted into farming, replacing older ones that are put on sale. Meat traders are the only possible buyers of the old cattle.
The growth of the dairy economy demands an addition of 1.5 million cows every year. Over 25 to 27.5 million heifers add to cattle population each year, giving farmers a generous option to choose the betters ones and discard over 20 million low-yielding cows.
The market for older cattle thus receives 50 million male and females. Each of them can fetch Rs. 5,000 for a farmer who cannot keep them in his yard as they turn a threat for the standing crops or demand fodder if kept within yards. Thus the market potential of the old cattle is of the order of Rs. 25,000 crore. Farmers use this money to buy new cattle.
Farmers in Jeopardy
If farmers cannot sell them, or are not allowed to sell them (as per the recently brought in Union Government legislation i.e., Prevention of Cruelty to Animals (regulation of livestock Markets) Rules, 2017, or in simple term a ban on sale of cattle for slaughter, the losses to the farmers would be staggering.
If the cattle cannot be slaughtered for the purpose of meat, the cattle population would witness a growth of 80 million unproductive animals which will either get into farms or wander on streets or bazaars. According to D. John Chelladurai, Dean, Gandhi Research Foundation, Jalgaon, these will lead to a growth rate of 27% in the cattle population annually. This means the cattle population will double in two years.
Lucknow based NGO, Kanha Upwan, Asia’s biggest shelter for stray cows, the expenditure on feeding a single cow is Rs. 1,950 a month. How could an average farmer’s family whose average monthly income (according to NSSO report) is Rs. 6,426, maintain an unproductive cattle head. The farmers will resort to add the expenditure of these animals onto milk from milch cattle, thereby raising the price of the milk and other dairy products.

Threat to Forest Cover
It is estimated that a herd of 25 cattle requires on acre of cultivated land or one hectare grazing land. With cattle population growing by 50 million annually, the additional requirement of grazing land will be of the order of 20 lakh hectares. Since, this demand cannot be met from existing farm lands, the only possible source will be forests which will have to yield 50,000 sq. km., a threat that might endanger forest cover.
Dr. Chelladurai terms it alarming as it amounts to 6.25% of the total 7,942 lakh sq. km of the total forest and tree cover.

Dung Heap in Cities
If the 80 million abandoned cattle are let out by the farmers and forest guards repel them, they are likely to move into street and bazaars of 4,000 cities and towns. As per the death rate, of these one lakh are likely to die in uncared for state. They are likely to over three lakh tones of dung on the streets. The civic authorities will face the problem of dealing with the additional waste. These towns and cities are already under tremendous pressure to tackle 62 million tonnes of urban waste, of which only 43 million tonnes is collected and only 12 million tones is treated and 31 million tonnes is dumped in landfills. With the ban in force, we will be facing an ecological catastrophe.

The question then is should we review the legislation in view of the cattle population ban that is ticking under our belly?

Losses to Leather Industry
In 2012-13 Livestock sector contributed 4.11% of the total GDP and 25.6% of the total agriculture GDP.
A survey Report titled “Situation Assessment Survey of Agricultural Households” by the National Sample Survey office (NSSO) documented livestock as the principal source of income for 23% of small and marginal farmers in 2016.
Informal statistics say that 80 million Indians eat beef or buffalo meat. Among them, 63 million are Muslims. This amount to 40% of the Muslim population.
So any restriction on the meat industry will hit Muslims on account of their food habits and will also have economic impact including loss in employment opportunities.
India’s meat industry employs approximately 22 million people, of which nearly 15 million are from Uttar Pradesh.
The economy of the UP meat industry was worth Rs. 22,000 crore before the meat crackdown.
Ever since Mr. Yogi Adityanath has taken over the reins of chief ministership of Uttar Pradesh, the buffalo meat industry has seen a decline of exports by 7.62% to $257.06 million due to closure of slaughter houses. It is anticipated that India will have to import buffalo hides from the United State of America to meet the demand for leather. Buffalo hides form more than 50% of the total leather demand.